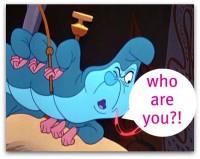 The opposition to the ban has been represented by an imported, industry lobbyist, Tom Giovanetti, who is President of Institute for Policy Innovation. He has not shown a sense of decorum in the debates or in his online presence. Frack Free Denton has appeared at these forum/debates with Giovanetti, at least, twice now with two more such events scheduled.

Giovanetti Tweeted that Frack Free Denton is afraid of him. 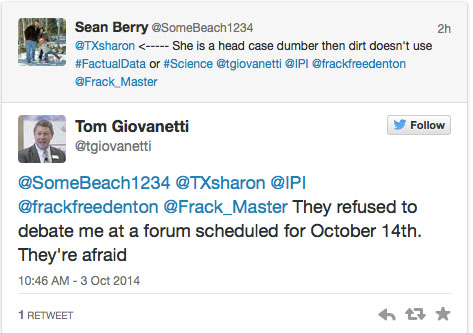 This got me to wondering two things: 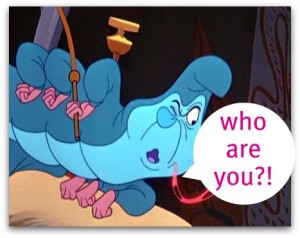 Being the curious type, I channeled the Caterpillar. And, as often happens with the players in the oil and gas industry, I found a rabbit hole of familiar characters.

You might remember that I have mentioned Rex Tillerson, ExxonMobil CEO, and Dick Armey previously

I was there in Bartonville, Texas with Rex and Dick.

The first time Rex Tillerson and Dick Armey addressed the Town of Bartonville about the water tower I was there. It was a night I will never forget and this is how I remember it.

Tillerson and Armey are all for fracking until it, or it’s infrastructure, ends up in their backyards.

So, here’s what all that has to do with Giovanetti:

His think tank, Institute for Policy Innovation, was founded by Dick Armey and is funded by ExxonMobil. I’m sure there is more to this rabbit hole but, for the moment, I’m out of time to dig.

Here is a video taken Tuesday of a midnight stroll in a Denton neighborhood.

Update: It’s worse than I thought.

There has been a Twitter exchange in which Giovanetti had a bit of a meltdown. He says he is not a lobbyist. I say he is. Read this New York Times opinion piece then you decide.

On Opinion Page, a Lobby’s Hand Is Often Unseen

Here are a few Cliff Notes? One of his colleagues, Susan Finston, at the Institute for Policy Innovation was caught red handed pretending to be a “research associate” and penning opinion pieces favorable to the drug industry as such. Later it was discovered that she was a registered lobbyist. The paper said it was not told of the conflict of interest when it printed the opinion.

Doug Bandow, a scholar for the libertarian Cato Institute and a columnist for the Copley News Service, resigned from both after acknowledging that he had received as much as $2,000 an article from Mr. Abramoff for writing in support of his lobbying clients, including Indian tribe casinos. Mr. Abramoff is now the focus of a federal corruption investigation involving his gifts to members of Congress.
[…]
But the payments by Mr. Abramoff and a closer review of the work of the Institute for Policy Innovation, a group founded in 1987 by a former House Republican leader, Dick Armey of Texas, are evidence that the ties may be much closer than research organizations, conservative and liberal, would prefer to admit.

Giovanetti didn’t see the problem but and says that lobbyists can change hats often. He said this…

“anyone working with I.P.I. must disclose any pertinent lobbying relationships and conflicts of interest whenever they act on behalf of I.P.I., including published projects.”

But then he did this…

Asked if the institute had accepted money from pharmaceutical manufacturers or any drug companies affiliated with Ms. Finston, Mr. Giovanetti would not comment.

But, that’s not all.

The slime oozing from disgraced and indicted lobbyist Jack Abramoff has seeped into some of the nation’s most prominent conservative think tanks, including the Cato Institute and the Institute for Policy Innovation. Collectively, those two organizations brought in $5.1 million from foundations over the past several years.

Eamon James covers the latest dimension to the Abramoff scandal in “Op-Eds for Sale,” which appears in the December 16, 2005 edition of BusinessWeek. In this article, James describes the relationship between Abramoff and Doug Bandow, who writes a column for the Copley News Service and was (until last week) a senior fellow at the Cato Institute. Over the past decade, Abramoff paid Bandow around $2,000 each for “12 to 24” columns that cast Abramoff’s lobbying clients and their policy positions in a favorable light. Bandow resigned from Cato last week, and claims that the think tank had no knowledge of his arrangement with Abramoff. Copley has suspended Bandow, pending its own investigation of the matter.

In the Institute for Policy Innovation case, Peter Ferrara, a senior policy adviser at the Institute, admits that he also received money from Abramoff to write op-eds that are favorable to Abramoff’s clients. According to James, Ferrara stated, “I do that all the time. I’ve done that in the past, and I’ll do it in the future.” Tom Giovanetti, the Institute’s president, agrees with Ferrara, stating this practice is not wrong or unethical. Hmmmm…what’s that saying about “absolute power…”?

What did I tell you about the rabbit hole? It’s another sink hole.

Here are a number of other articles. Giovanetti’s institute seems to be all over the place, but the common theme is pseudo-scholarly articles that support some big business interests. In 2012 they brought in $957K in donations and had two employees, Giovanetti and Mark Miller.

The price of Integrity