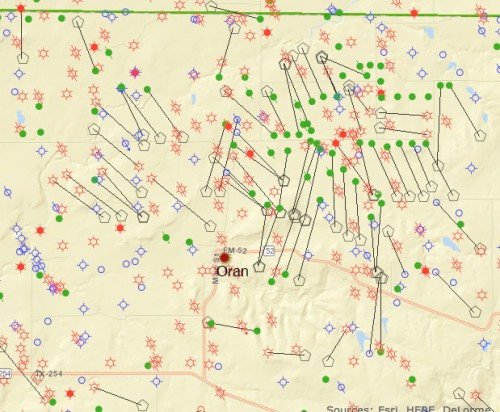 It was a flash fire of water that came suddenly gushing from a water well and sent four people to the hospital one of whom is a 4-year-old.

The fire’s cause was not known, he said, but there is a possibility methane had contaminated the water and had contact with something that caused the gas to ignite. Flash fires, in general, are caused by the ignition of a mixture of air and a combustible substance, such as a flammable gas.

People have asked if there is fracking in the area. Seems so.

Palo Pinto County is where a gas well explosion in 2005 left a crater the size of a football field. The flash was seen 100 miles away.

From the Denton Record Chronicle:

Blowouts, while uncommon and the result of various factors, come with great risks. In December 2005, an operator lost control of a Barnett Shale gas well being drilled near Brad in Palo Pinto County. The ensuing explosion blew a 750-foot-wide crater in the ground, and the fire burned uncontrollably for several days. Workers had left the site when trouble began hours before, but one crew member was injured when the flames engulfed his truck as he sat nearby.

What a horrible, horrible thing.