Playing by the rules.

For nearly 5 years, Denton residents have tried everything possible to get reasonable regulation of the oil and gas industry in their city. They attended council meetings, participated in a sham drilling task force that was stacked with industry insiders, wrote letters, made phone calls, wrote draft regulations and…you name it, they tried it. They played by all the rules, dotted every “i” and crossed every “t”. Still industry is allowed to drill and frack only 250′ from neighborhoods where families with small children live.

There are already over 270 wells inside the city of Denton, Texas, but that’s not nearly enough for the industry. It’s never enough.

In a Natural Gas Intelligence article, industry spokesman, Ed Ireland, admitted that old permits issued by the fire department before the city’s oil and gas division existed allow an unlimited amount of wells to be drilled at each pad site in perpetuity. 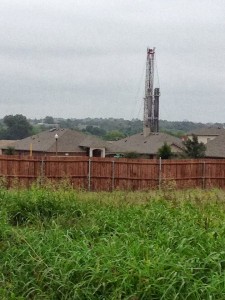 That means there could be HUNDREDS of additional wells drilled and fracked inside Denton city limits!

A  loophole in the city ordinance allows these wells to be drilled and fracked only 200′ from homes.

As a very last resort, the Denton Drilling Awarness Group decided to circulate a petition to put to a vote an initiative to ban fracking in the city limits.

Deception that rivals the tobacco industry.

We knew industry would fight with their deep pockets and their deception but we didn’t know they would start the fight so early.

Denton residents report that they are receiving deceptive polling calls from a California number. Some residents have received several of these calls. A board member of the Denton Drilling Awareness Group received one of these calls.

Here are some of the questions reported and my response:

“How do you feel about your property taxes going up to pay for lawsuits related to the hydraulic fracturing ban?”

Flower Mound has been sued 5 times. They won 4 of those lawsuits and the 5th has been pending since 2010 with no discovery yet. Some of the court costs were returned to the city.

This is a scare tactic used by industry and some city officials have repeated this scare tactic without being fully informed. Please read “A Fracking Ban Will Not Sink the City” for a more realistic and informed opinion.

“How do you feel about a group of liberal college students, who do not live in Denton, pushing the agenda for Frack Free Denton’s ban on hydraulic fracturing?”

This is so misleading and false it’s laughable. Frack Free Denton is the campaign of the Denton Drilling Awareness Group, which consists of: Cathy McMullen who is a registered nurse in her 50s, Adam Briggle who is a UNT professor in his 30s, Rhonda Love who is a retired professor in her 60s and Ed and Carol Soph, Ed is a UNT professor and I’m guessing Ed and Carol are 50ish. They are the board members and there are no other members. I’m am an adviser. They all own homes in Denton and have been long-time residents.

There has been zero involvement from MoveOn or any other “outside” group as one question claimed. CREDO sent out one email alert to their members. Earthworks is the only group involved and I worked in Denton for 7 years, lived there for several and will soon be moving back so my son can attend college there. So, I won’t be calling from a California number because I’m a 5th generation Texan who has never lived anywhere else.

“Would it change your opinion if you knew that this ban is illegal and will waste millions of dollars of Denton taxpayer money?”

It’s not illegal and the ban will hold up in court. Again see: “A Fracking Ban Will Not Sink the City”

“…home rule cities have the inherent authority to do just about anything that qualifies as a ‘public purpose’ and is not contrary to the constitution or laws of the state.” Texas Municipal League

“Would it change your opinion if you knew that this ban would drive down property values throughout Denton?”

Drilling vs the American Dream: Fracking impacts on property rights and home values

The above are only three sources that show fracking diminishes property values. It also diminishes your enjoyment of our property due to noise, lights, truck traffic and horrible odors.

Hundreds of American cities have banned fracking in a effort to protect families’ health and well-being and to preserve the character of their cities.

This polling gives us an idea about the talking points industry will use to fight Frack Free Denton. The industry has unlimited resources to spend in Denton, Texas. All we have are our families, our private property and our city to protect.