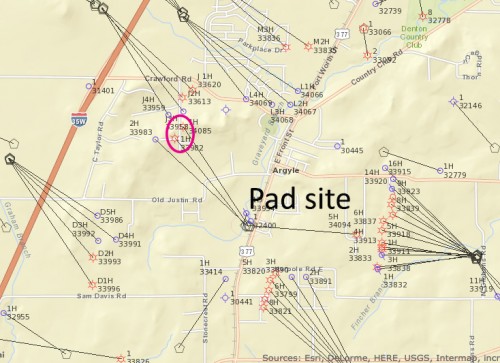 Judge Doug Robison who presides over the 393rd District Court and will hear Case No. 14-01430-393 where homeowners are suing EagleRidge Energy is heavily invested in the oil and gas industry and profits directly from drilling in Denton County.

Forty-three homeowners in the Vintage and Meadows at Hickory Creek neighborhoods have filed a lawsuit against EagleRidge Energy, seeking up to $25 million in damages for creating what the suit claims are nuisances that have diminished the value of their properties.
Denton Record Chronicle: Lawsuit filed against company

EagleRidge Energy drilled and fracked several wells about 250 feet from the Vintage and Meadows neighborhoods. This process took several months, exposed them to nuisances including noise, lights, truck traffic and toxic chemicals that trespassed onto their property. Now their homes are neighbors to two heavy industrial facilities and they are left with ongoing disturbances, risk of repeated exposures and diminished property values.

Judge Robison’s financial records along with many other officials are available at the Denton Record Chronicle . If homeowners win a lawsuit against any operator in the Denton area, it will make things harder for other operators. Finding for the homeowners would have a direct impact on Robison’s pocketbook.

The Record-Chronicle evaluated hundreds of pages of personal financial statements for 53 county and city officials as part of Sunshine Week, a 13-year-old national initiative by journalists and open-government advocates held in March to promote public access to government records. Sunshine Week begins today and ends Friday.
Denton Record Chronicle: Close to the vest

Here are some items of interest in Robison’s financial records.

First up, Robison receives royalty payments on minerals rights that were leased to Hillwood Oil & Gas Operating Co. Lp. The Whitehead Hall Unit 1h and Jenkins Unit 1h were both drilled from the same padsite.

This Hillwood well is the one that caused a haze of fumes around Argyle High School and caused the students  to complain about health effects.

Complaints about students with nosebleeds, dizziness, disorientation and nausea started appearing on the alliance’s blog in early October. Some residents reported smelling rotten eggs, a smell associated with sulfides, while others reported odors similar to gas, pesticides and fingernail polish remover.

Here is a map showing the Hillwood padsite for the Whitehead Hall and Jenkins wells 1/2 mile from Argyle High School. Larger version 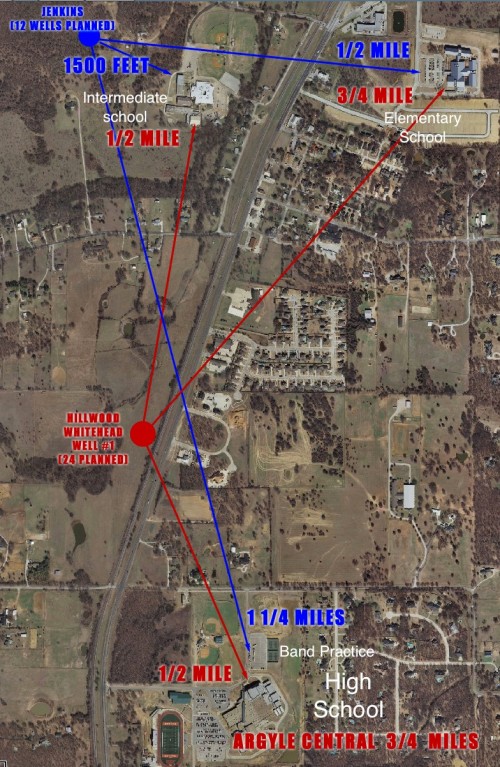 The TCEQ did testing because of numerous complaints and found 64 different chemicals on the lot where the high school band practices. This is significant because baseline testing in the area before drilling was well advanced showed only 7 chemicals and toxicologists now know that co-exposures to two carcinogens can double your risk of cancer. Toxicologists are just beginning to study the mixtures of chemicals and how they can magnify the effects as explained in this excellent video by Dr. David Brown.

I accompanied a bunch of the parents to speak at the Argyle ISD Board Meeting. Robison was a board member for the Argye ISD from 2000-2006 so he wasn’t there when we spoke. While he was on the board, he recused himself from discussions about oil and gas on May 15, 2006, which is an admission of a conflict of interest. (He likely recused himself other times but I’m too lazy to look those up.)

Robison knew the value of minerals even back in 2006 when he sold a chunk of land in Argyle and retained the mineral rights. If fracking expands in that area he stands to make significant profits.

Here are some other items on Robison’s financial statement that I found interesting.

He owns stock in the following companies:

He receives royalties from the following companies:

Robison owns more acreage in the Argyle area and our investigations are ongoing. But this is plenty of proof that Robison should recuse himself from hearing this case.