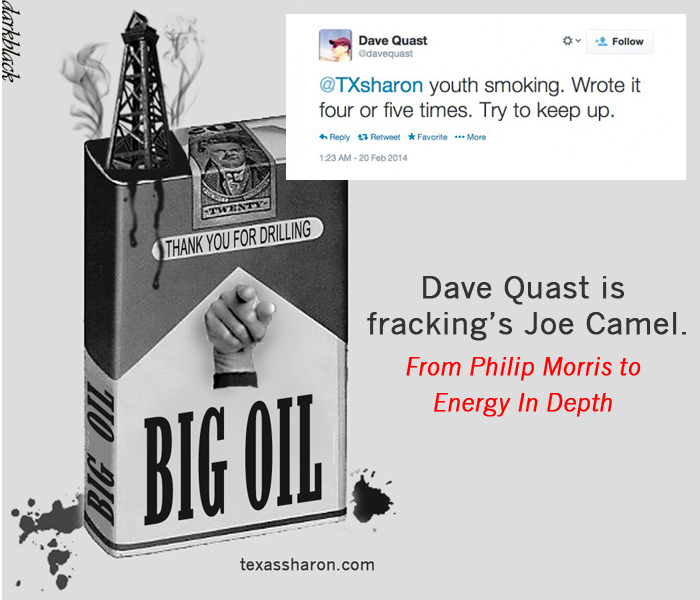 David Quast teen smoking author worked for Philip Morris from 1997 to 1998 as manager of media affairs. He still brags about writing their Youth Smoking Prevention program that was designed to subtly lure youth to smoke.

Quast now has a new gig as California field director for Energy In Depth, where he is attempting to lure Californians to fracking.

The tobacco industry knows that children are critical as their “only source of replacement smokers,” so marketing to youth is essential to ensure their industry does not decline. After the 1998 Master Settlement Agreement (MSA) prohibited tobacco companies from specifically targeting youth with advertising, the tobacco industry had to find more subtle ways to market cigarettes to youth and adolescents. 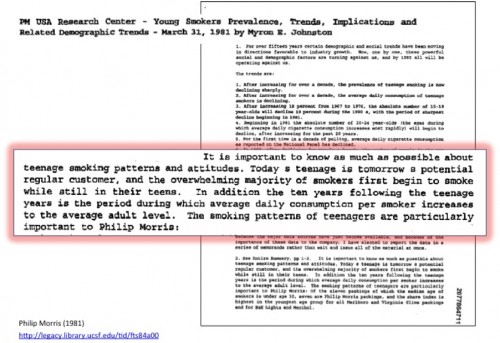 In 1991, Philip Morris started the Archetype Project to “study the emotional reasons why people smoke.” They learned that most people first smoked between the ages of 4 and 9 years old when they saw an admired adult smoke and felt excluded. The project made the following recommendations to Philip Morris.

Stress that smoking is for adults only. Make it difficult for minors to obtain cigarettes. Continue having smoking perceived as a legitimate, albeit morally ambiguous adult activity. Smoking should occupy the middle ground between activities that everyone can partake in vs. activities that only the fringe of society embraces. Stress that smoking is dangerous. Smoking is for people who like to take risks, who are not afraid of taboos, who take life as an adventure to prove themselves. Emphasize the ritualistic elements of smoking, particularly fire and smoke. Emphasize the individualism/conformity dichotomy Stress the popularity of a brand, that choosing it will reinforce your identity AND your integration into the group.

By reading his correspondence in the Legacy Tobacco Documents Library, you can see that Quast fully embraced the “forbidden fruit” and “adults only” messaging designed to lure children to smoke. In the following memo, Quast recounts his conversation with a journalist in which he said, “smoking is an adult choice.” 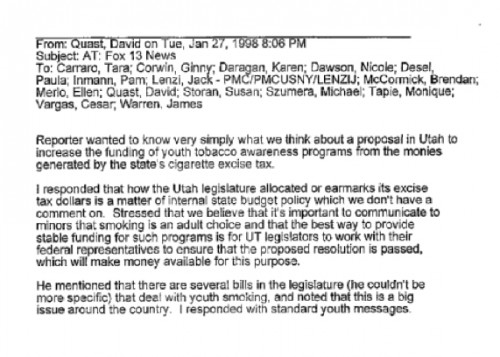 Other correspondence written by Quast while at Philip Morris includes:

•    Minority outreach to “ensure we are reaching the Hispanic community as effectively as possible” and “…add an Asian outreach.” (Equal opportunity cancer.)
•    Placing cigarette favorable third party op-eds
•    Pitching stories designed to create doubt using academics to lend credibility
•    Beating up on the EPA saying they used unsound science and are politically motivated.

Quast has a new job now. He goes by Dave Quast and is senior director in the Strategic Communications segment at FTI Consulting, the same consulting firm that promoted destabilization and violence in Venezuela. He is Director of Energy In Depth’s California division, where he does the same tasks he did at Philip Morris.

Quast made his presence known in California at public comments sessions, as he berated environmentalists looking to strengthen the states scientific study on fracking. Calling them extremists, and out of touch, he proceeded to reassure Californians that fracking is a safe practice that has been done in California for decades with full transparency. The fact is that is thatCalifornia regulators didn’t even know fracking was happening in the state, and didn’t acknowledge its full existence until 2012. Furthermore, Quast called on the state to reject arguments for a moratorium, calling California’s regulations “the strictest in the nation.” Unfortunately for him, his statements are highly untrue. Proposed regulations on fracking in California are not the strictest in the nation. More stringent regulations can be found in other states, such as Alaska and even Texas.

Quast continued his half-truths and attacks on environmentalists in an editorial in the U-T San Diego, calling us radicals.

“Sadly, activists could be heard yelling things like “we don’t want these new jobs!” at a series of recent public hearings around the state regarding the implementation of California’s new hydraulic fracturing regulations.”

Jhon Arbelaez, California Organizer for Earthworks was present at hearings all over Southern California, and at no point did he hear these statements from anyone. Perhaps, in his limited viewpoint, Quast decided to only listen to what he wanted to, ignoring the fact that environmentalists are calling for an increase in green energy development, which will bring about highly paid, professional, and sustainable jobs to California, while weaning the state away from fossil fuels and reducing climate change.

In a great response to Quast’s editorial in the same publication, David Turnbull, Campaigns Director with Oil Change International, said it best: “We can’t stop Mr. Quast from choosing to call them [environmentalists] ‘radicals,’ unfortunately. We simply choose to call them Californians.” 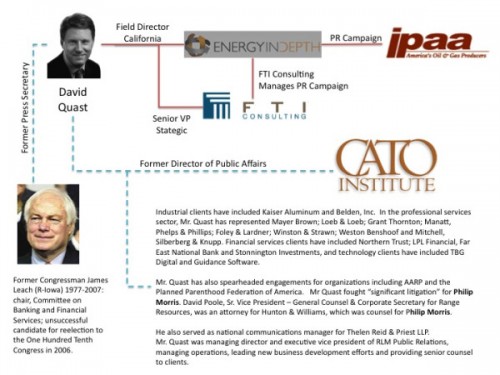 At Philip Morris, Quast received excellent training for his current job at Energy In Depth. Deception is the main skill required whether you are peddling cigarettes to youth or fracking to Californians.