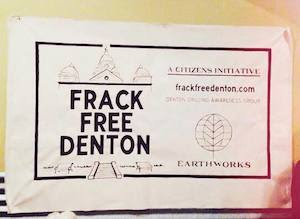 You can help Denton, TX go frack free with your donation today!

If Texans can’t live with fracking, no one can.

Denton is located right in the heart of Texas’ Barnett Shale. It’s less than 10 miles from the home of Exxon’s CEO Rex Tillerson, who has been in the news for opposing a water tower near his property that would supply frackers.

For the last five years, I’ve helped organize the people of Denton to protect themselves from the impacts of drilling and fracking. We have literally tried everything to develop reasonable regulations and prevent harm people and the environment. We battled the oil and gas companies every step of the way as they fought common sense measures. The city passed weak ordinances that are full of loopholes. In some places fracking is now taking place only 250 feet away from people’s homes.

The people of Denton are fed up and are taking matters into their own hands. You can help them win this final battle. As local resident Adam Briggle says,

“You can have fracking or you can have a healthy city, but you can’t have both.”

Last month, Frack Free Denton launched their campaign to put fracking to a vote. They’ve got less than 180 days to collect signatures. So far, community response has been incredible! But we still have a long battle ahead.

It’s not easy to stand up to the oil and gas companies – especially in Texas. But if this ban passes, fracking companies will only have themselves to blame.

Will you help Denton send the fracking industry a message that they are not welcome?

DONATE NOW: Your donation will be used to help Frack Free Denton’s campaign to ban fracking within the city limits.

Thank you for your support!