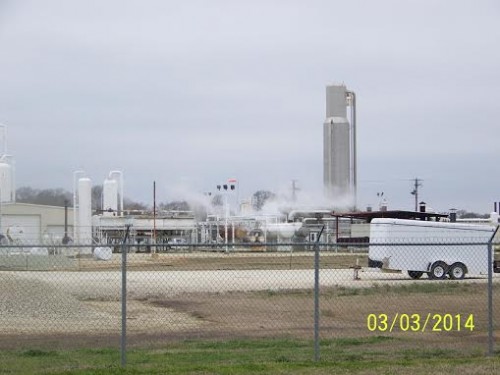 This is one part of natural gas that the industry never talks about. They don’t want you to know about it until it’s too late to stop.

Here is a reader submitted photo of a gas plant in Robertson County aka Booger County and the reader’s comment.

The fumes appear to be from the amine re-boilers which are using raw sour gas for fuel. Lots of emissions from short stacks, including SO2, and other SOX’s–also lots of VOX’s NOX’s, and H2S. Emissions include CO2 which gathers in low areas and lowers the oxygen content in the air.

Anyone who promotes “clean burning natural gas” needs to have one of these huffing, puffing, monsters near their home.
Welcome to Booger County, Texas

One of the more notorious natural gas refineries in the Barnett Shale is the one in Argyle/Bartonville only 100 feet from a family’s home and only a few more feet from several other homes. 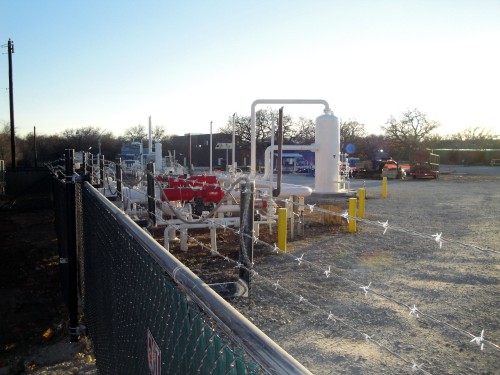 This facility processes natural gas from Exxon’s XTO gas wells in the Argyle/Bartonville area. The home in the photo above was devalued after this facility went in from $361,000 on the 2009 tax rolls to $95,000 on the 2010 tax rolls. So we understand Rex Tillerson’s concerns about damage to his property value from a water tower that partially serves as infrastructure to support fracking in the area.

Unlike the water tower that concerns Tillerson, these natural gas refinery types of infrastructure can actually make people sick from the emissions and releases of toxic gases and might cause them to evacuate their homes, even in the middle of the night.