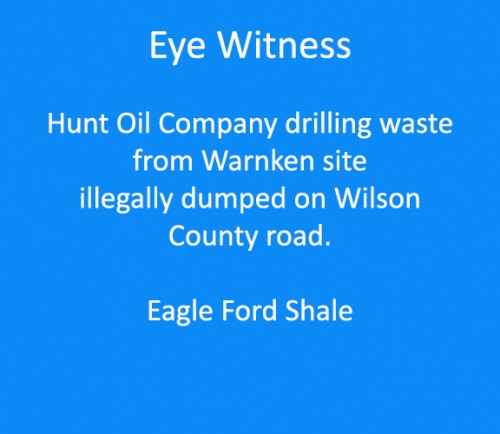 On the evening of January 15th as I was driving home, a tanker truck was stopped slightly to my side of the middle of County Road 205 in Wilson County, outside of Poth, TX.  It looked as if the tractor trailer had just turned out of the active well site that he was parked almost in front of.  Slowing my vehicle, I noticed the driver, dressed in his protective coveralls, approaching his door from the rear.  After rolling down the window to get a better view, the air strongly smelled of diesel fuel. As I got to the back of the truck and saw that there was fluid being spewed on the caliche road; it was apparent that the smell was coming from the blackish, brownish fountain  coating the road. It was too dark to get a picture on my phone.

I hurried home with our 5 month old son, as there was nothing more I could do with him in my care. The only containers onboard were his baby bottle and my reusable water bottle. While unloading at our home, mud lodged on my vehicle from the road accidentally smeared onto my pants. Inside, I relayed the disturbing events to my husband, our children, and the other family sharing supper with us that night. Holding out the mud on my hand, they each took a whiff. It was then decided that one of our friends would drive, get samples of the fluid and I would use a better camera.

Canning jars in hand, we were too late to get images of the truck. He had finished the last bit of the three mile stretch.  Our friend scooped up jars full from the ample puddles, while I tried to get video. All of this mud and puddles in the video were from the waterfall of smelly fluid as it has not rained in our area.  So much so, that a burn ban was enacted at the commissioners court meeting we attended to try to get some answers about the illegal dumping.

There we were heard in the public comments time slot. I attempted to pass the stinky liquid around for each to sniff, however some refused. It was agreed by those present that there was a strong petroleum odor. We were told that no one is to be spraying the road at night. During the day, they are to be accompanied by county employees with road maintance tractors. Hunt Oil Company is allowed to spray “safe water” on Wilson County roads after it has been tested by them. I was admonished for being unable to get pictures of the truck & told to call our commisioner immediatly if it happens again.

This was at least the 4th time we have seen trucks spraying long stretches of roads without county crews alongside. Suprisingly, just a few weeks before, this fact never came up in a phone conversation with Precinct 2 Commisioner Pfeil about an “Action Frac Fluids” truck spraying our ditches, fencelines, and onto our farm property on a stretch that we have both sides of the road. That time the sheriff’s office was contacted. I spoke to Mr. Pfeil and had pictures of that truck in broad daylight. This was the first we learned of Hunt’s “safe water”, only allowed to be applied to roads. When the concern for our livestock’s wellness was voiced, he replied “no animals have died in areas they have been spraying”. Then he called around and assured us that, as the driver had said, that time it was only “fresh water” from an agricultural well tank. Let’s hope there is no next time.