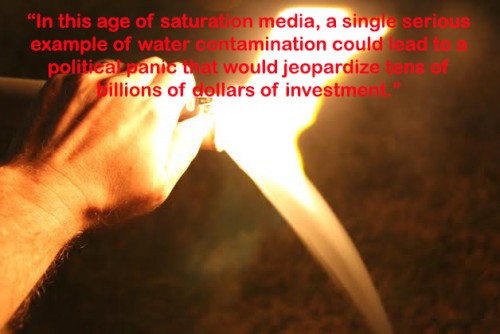 Yesterday there was a hearing in DC on the supposed EPA overreach in Texas.  Steve Lipsky attended the hearing but was not invited to give testimony. I didn’t attend but I heard from several sources that “the Republicans” laughed in his face, pointed and took pictures of him. Lamar Smith seemed to be the biggest offender. Stay classy and mature fellas.

David Porter, Texas Railroad (RRC) Commissioner,  who has never been to Steve Lipsky’s home to witness his water lighting on fire, gave testimony that was outrageously false, deceptive and misleading. Scroll to page 17, past the bragging about what a great job the RRC does at regulating oil and gas in Texas. Here are just a couple of items that I have redlined in his Contempt of Congress.

The hose was connected to the what?

Despite the FACT that the RRC and the EPA used the hose connected to the wellhead vent to collect their samples of the gas in Lipsky’s water well, which proves the RRC knew it was not connected to the water, Porter used activist Judge Loftin’s ruling about the video calling it deceptive.

Dragging out the conspiracy theory.

Porter even threw in the conspiracy theory that was thrown out by the Court of Appeals for lack of evidence and he quoted the now disgraced activist Judge Loftin who lost his election and was forced to recuse himself due to a scandal about his clear conflict of interest.

I think the following comment exposes the RRC’s agenda as far as learning the truth about water contamination in Parker County.

Unfortunately, the story does not end there. Within the last six months, there have been nine new complaints filed from residents in Mr. Lipsky’s neighborhood, including Mr. Lipsky. These new complaints remain active, the most recent being filed on January 27, 2014.

Unfortunately as much as Porter wants the story to end, it’s not going to. Residents whose water was also contaminated but who were too afraid that Range Resources would sue them like they did the Lipsky’s are starting to come forward. Intimidation stops working when people get tired of having contaminated water.

Last night WFAA’s Brett Shipp did another excellent report and another of Lipsky’s neighbors is coming forward.