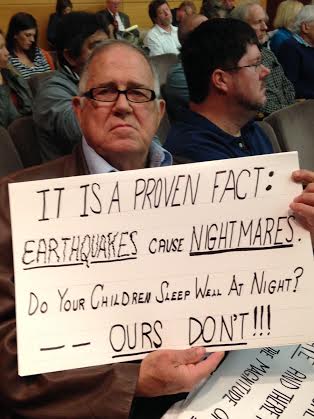 Austin/Azle, Jan 21 – Today 50 residents of the Azle/Reno area traveled to Austin to compel the Texas Railroad Commission to publicly declare how they were going to address the issue of fracking-related earthquakes. Thirty quakes have occurred in the area since fracking wastewater injection wells began.

Despite scientific authorities linking fracking wastewater injection wells to earthquakes, including the United States Geological Survey and the National Academies of Science, the Railroad Commission announced at the meeting that they would not take action to protect the public until after their seismologist had studied the issue in Texas.

“In other states where fracking wastewater injection wells have been shut down, earthquakes disappear,” said Reno Mayor Lynda Stokes, whose town has been damaged by the recent earthquakes. She continued, “This isn’t rocket science. Common sense tells you that fracking waste disposal is playing a big role in this. Don’t make us guinea pigs while you study.”

“If Texas regulators want to show they’re not owned by the oil and gas industry, the Railroad Commission needs to protect impacted people and stop fracking wastewater disposal while the study occurs,” said Earthworks’ Texas organizer Sharon Wilson. She continued, “Otherwise the study is just another excuse to delay and hope the issue goes away.”

Azle/Reno area residents rode the 8 hours back and forth to Austin in a rented bus because Commissioners (the Texas regulators of the oil and gas industry, not railroads) failed to answer citizens’ questions in Azle earlier this month.

“This is a property rights issue, pure and simple,” said Barbara Brown of Reno, Texas. “The most profitable industry in the country is damaging our homes. And the Railroad Commission is not only allowing it, they’re forcing homeowners to pay the damages.”