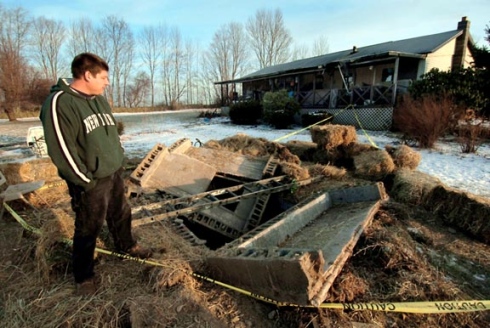 Our government–local, state and federal–knows about this and they are ignoring the imminent danger to several families.

A couple of weeks ago, Steve Lipsky wrote a letter to the EPA. The methane contamination plume in the aquifer in his area is getting much worse. People in that area now have methane bombs in their yards/garages that could ignite with one spark.

No one is doing anything about this.

Read the letter then watch these videos (The Texas Railroad Commission was present when the videos were taken). NOTE: 50,000 ppm is explosive limit.

According to scientists, these are some of the highest numbers ever recorded.

UPDATE: Here is a list of the RRC employees present when the videos above were taken:

The RRC employees acknowledged that the vents and the water holding tank were at explosive levels. But they would not record them because they do not do air samples. It’s not my job!

When the RRC filed their official report of the complaint, there was no mention of the explosive levels of methane and total gases. According to Lipsky the report implies that there is no dangerous situation. Yet, when confronted, they admitted that the well was very dangerous. They were unable to explain why that information was not in the official report. But I think I know why. It’s called malfeasance.

Someone needs to do something before it’s too late. STOP playing politics and gambling with these families lives.