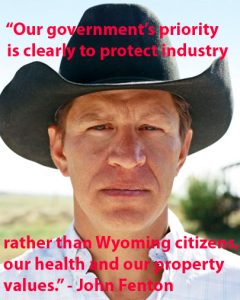 The state of Wyoming is taking over a U.S. EPA investigation into the possible contamination of Pavillion, WY area groundwater by fracking.

EPA had already concluded — for the first time — that fracking had polluted groundwater, and was getting their conclusion peer reviewed when Wyoming’s Governor Mead announced it was taking over.

The state could only take control if the Obama administration allowed it. In allowing it, the White House is allowing the very interests who denied there was a problem in the first place to — in essence — investigate themselves. And now the people around Pavillion have been abandoned, their polluted drinking water unresolved.

TAKE ACTION: Tell President Obama and the EPA to stand by their own study!