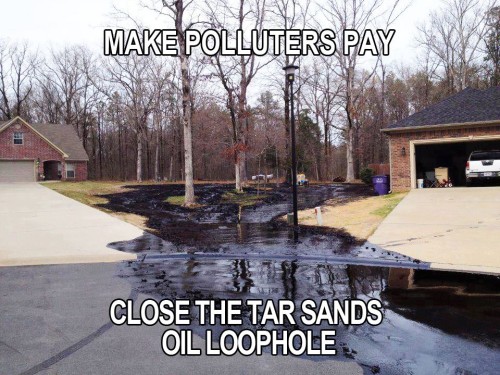 Exxon spilled 84,000 gallons of crude oil in Arkansas
and a legal loophole will let them get away with it

Last week a pipeline carrying tar sands oil from Canada to the US broke, spilling thousands of gallons of dirty crude in Mayflower, Arkansas.

Instead of placing the whole burden of clean up costs on taxpayers, when a company spills oil they have to pay into the federal Oil Spill Liability Trust Fund.

But what if it isn’t, technically and legally, oil?

That’s right: Exxon doesn’t have to pay a dime. Taxpayers do.

TAKE ACTION: Tell your Representatives and the President close the loophole and prevent more spills by stopping the Keystone XL pipeline!

P.S. Exxon spent $2 million dollars on a pro-fracking ad campaign. I think they should pay to clean up their messes.