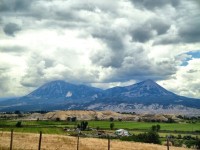 People who live in Paonia walk or ride bikes. Everywhere are organic farms and orchards, shops and co-ops that sell organic produce and fruit, meat, wine, beauty products, yarn, honey… from local sustainable farms. No matter which direction you turn, all you can see is beautiful. Paonia is a model for the rest of US.

Paonia is about to get fracked!

The creek above Paonia is slowing to a trickle in July’s heat, the watershed as dry as those that recently burned for two weeks outside Colorado Springs. But in late May it was running fast and milky with snowmelt. Fallen trees propped on rocks threshed the current. A light wind carried the smell of cold stone and spruce, and upstream in the V of the little canyon I could see Mount Beckwith and the green aspen on its shoulders. On the gravel bars, white moths flitted in and out of sunlight. I’d already crossed the fresh tracks of elk, deer, and bear. I waded up the middle, casting to either side, and when I caught two heavy rainbows I zipped them into my vest and headed back to the truck. I hummed as I walked, happy to be back after a month away.

Twenty-two years ago, I built a small off-the-grid adobe house beneath the mountain. Like a lot of others who came to the North Fork Valley, I never really left. When I hunt, I walk out the front door and onto the mountain in the dark. My wife and I bike and ski all over the surrounding ridges, within minutes of town. We live mostly in Denver, but go back to the house as often as we can.

With the trout in a cooler, I drove along the North Fork of the Gunnison River. The road passed a mile of orchards along the river and little signs: Holy Terror Farm, Stone Cottage Cellars, Black Bridge Winery. As the road descends and the valley opens up, Paonia looks like a train set bedded in farms, orchards, and ranches, beneath the rugged peaks of the West Elk Wilderness. In recent years magazines and travel programs have taken to calling this valley, with its three small towns, the Golden Triangle, for its quality of life and exploding food and wine scene.

Read the rest of this heartbreakingly beautiful piece HERE.

Before 1990, Paonia was nationally famous for Paonia Purple marijuana. Today Paonia is known for having the largest concentration of sustainable agriculture in the Rocky Mountains.

The BLM lands mentioned in the article have again come up for nomination for a February 2013 lease sale. The nominated parcels are just over 20,000 acres and were granted a 30 day protest period (ending December 17). Efforts are currently being made to bring these issues to the attention of the White House by gathering 25,000 signatures by December 20, 2012.

HOW TO HELP: Please add your signature to this petition.

Get more information at Citizens for a Healthy Community and The Conservation Center.

These have become our choices:

More dirty energy or food just this week we learned about The end of Pasta from fracking in the Bakken Shale. “What will we eat when wheat won’t grow?”

More dirty energy or water. The drought is intensifying in Texas. It takes water to grow food.