Germany listened to Jimmy Carter and it turns out he was right and Ronald Reagan was wrong. 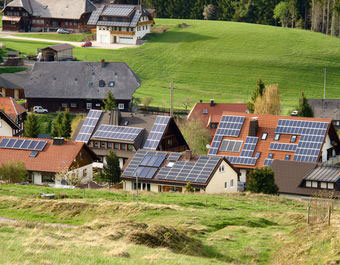 Twenty-five percent of Germany’s energy comes from renewable energy sources and by 2050 100% of their energy will come from renewables.

Published on Thursday, November 15, 2012 by TruthDig.com
How Germany Is Getting to 100 Percent Renewable Energy
by Thomas Hedges

Germans are baffled that the United States has not taken the same path. Not only is the U.S. the wealthiest nation in the world, but it’s also credited with jump-starting Germany’s green movement 40 years ago.

“This is a very American idea,” Arne Jungjohann, a director at the Heinrich Boll Stiftung Foundation (HBSF), said at a press conference Tuesday morning in Washington, D.C. “We got this from Jimmy Carter.”

In Texas the oil & gas industry can obtain a permit in seven days to drill for dirty fossil fuels. For solar panels, the “permitting process” takes six months.

Germany adopted and continued Carter’s push for energy conservation while the U.S. abandoned further efforts. The death of an American Energiewende solidified when President Ronald Reagan ripped down the solar panels atop the White House that Carter had installed.

Germany’s program is controlled by the ratepayers not the government so “funding is not at the whim of politicians,” who in the U.S. are so heavily influenced by industry they ignore the citizens.

The press conference the foundation organized with InsideClimate News comes two weeks after one of the biggest storms in U.S. history and sits in the shadow of the Keystone XL Pipeline, which would unlock the world’s second-largest oil reserve in Canada. The event also comes one day after a report that says that the U.S. is on track to become the leading oil and gas producer by 2020, which suggests that the U.S. has the capability to match Germany’s green movement, but is instead using its resources to deepen its dependency on fossil fuels.

In the U.S., everything is set up to favor industry and utility companies. It’s just the opposite in Germany.

The largest difference, panelists said, between Germany and the U.S. is how reactive the government is to its citizens. Democracy in Germany has meant keeping and strengthening regulatory agencies while forming policies that put public ownership ahead of private ownership.

“In the end,” says Davidson, who spent a month in Germany studying the Energiewende, “it isn’t about making money. It’s about quality of life.”

Americans could have the same if corporations were no longer considered people and if we get campaign finance reform. That’s the only way it will happen.