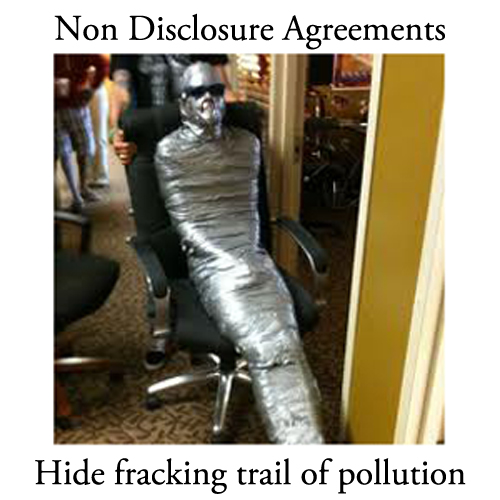 “The question is, did you create an environmental problem by using it, and the answer is ‘no,'” said Lee Fuller* of the Independent Petroleum Association of America.

That quote from Fuller comes from Friday’s E&E article:

Dear Mr. Fuller, the proof of environmental harm is all wrapped up right here:

Because baseline testing is not required nationwide before fracking occurs, there is no way for landowners to prove culpability when their water ends up contaminated after fracking.

When a landowner does have proof, operator hands them a non disclosure agreement (NDA) that takes away their 1st Amendment rights and a check to buy their property so they can leave. All proof is hidden behind the NDA, and since the operator now owns the property no further testing is possible.

Only, one time the landowners did get baseline testing and they gave me the results. Shortly before fracking their water was clean and safe.

Shortly after fracking they had follow up testing that showed their water was contaminated with high levels of MTBE an additive in diesel fuel. The landowners also gave me the the follow up test results.

Just like the tobacco mafia did any time new tobacco regulation was enforced, the oil & gas mafia finds a way to circumvent attempts to force it to be more responsible.

At first I thought the oil & gas mafia was using the tobacco mafia‘s playbook as a blueprint. Now I’m finding that many of the players are the same. Maybe it’s really one big mafia that we should call the Frackbacco Mafia.

Tell the EPA to Ban Diesel in Fracking Fluids!

The EPA, until August 23rd, is welcoming comment on their guidance to states and regional offices over how to regulate the use of diesel fuel in fracking fluids. Our guidance to EPA is simple. Ban diesel.

This all started back in 2005 when the newly re-elected Bush/Cheney Administration began hosting secret, closed-door meetings at the White House with Halliburton and other drillers. The meetings resulted in the Energy Policy Act of 2005, which exempted fracking from our bedrock environmental laws.

But Congress recognized the cancer-causing dangers of usingdiesel fuel in fracking and specifically chose to ensure EPA still has the authority to regulate diesel use.

But the industry ignored the law. From 2005-2009, drillers illegally injected 30 million gallons of fracking fluids containing dieselwithout a permit.

That brings us to today. The EPA needs to hear from us.

They already heard from the industry. At a recent hearing, the American Petroleum Institute actually argued that the EPA dieselguidance was a “solution in search of a problem”. The solution need not search very far for a problem when the industry is violating the law.

Only completely banning diesel use will create certainty and help enforcement and compliance.