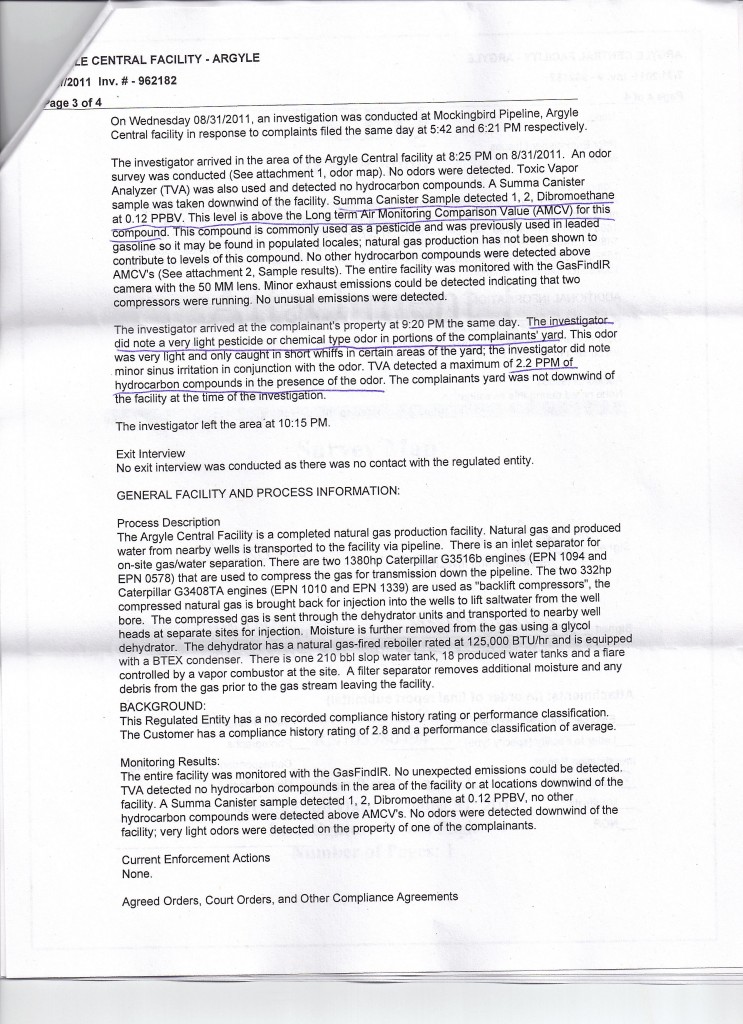 Natural-gas compressors, pipelines and plants released more than 70,000 tons of pollutants in Texas over the past three years due to accidents or other “abnormal” events, a watchdog group said today.
[…]
“Too many of these ‘accidents’ are the norm at some natural gas and chemical plants,” Eric Schaeffer, the Washington-based group’s director, said in a statement. The “EPA needs to crack down on polluters who seem to think that these events — no matter how many or how severe — somehow excuse them.”

Natural gas operations — which include, well heads, pipelines, compressors, boosters, and storage systems — accounted for more than 85% of total sulfur dioxide and nearly 80% of the VOCs released during these episodes. Both pollutants are linked to asthma attacks and other respiratory ailments, and can form fine particles that contribute to premature death from heart disease.

An amazing amount of pollutants have been released at the Argyle Central Facility (ACF) a facility that, until recently, was operated by Williams in an Argyle neighborhood only feet from homes.

On November 15, 2010, a resident whose home is only 100′ from ACF called TCEQ with a complaint of strong odors coming from the facility. Using their Toxic Vapor Analyzer (TVA) the TCEQ measured Volatile Organic Compounds VOCs on the resident’s porch at 800 ppm (that equates to 800,000 ppb). Williams received no violation.

ON PAPER:  The residents near ACF have been constantly plagued with the “accidental” and “scheduled” releases. According to the permit, the facility will have about 144 blowdowns per year, or about one every two-three days.

IN REALITY: From TCEQ open records, in 2011, there were 501 blowdowns, or about 1.37 on average each day. EACH DAY! Williams/Mockingbird was operating in violation of their air permit after February 3. This indicates a failure of TCEQ to audit for compliance and a failed opportunity for the TCEQ to regulate.

In one year there were over 50 complaints about this facility and people have complained of a variety of health effects, including headaches, nausea and nosebleeds.

TCEQ investigators have also complained of health impacts when called to the site for investigations. On one such visit, the air testing results found 1,2 Dibromoethane at .12 ppb, which is above the long term Air Monitoring Comparison Value (AMCV). The investigator’s report states: The investigator did note minor sinus irritation in conjunction with the odor.

1,2-Dibromoethane, or EDB — is a known carcinogen, ranking as the top carcinogenic substance on the Human Exposure/Rodent Potency Index.  Source

Despite all this, TCEQ has never issued a violation against this facility. What does it say to you, as a fellow Texan, that a facility can release dangerous levels of toxic chemicals into the air causing health effects, yet no violations are found? To me is says: If you live near drilling in Texas, you can expect to get sick. Tough luck.

Thankfully, the EPA did issue a violation on September 27, 2011, for a violation of the Clean Air Act. The violation states: The general duty clause violation found consists of a release of an extremely hazardous substance; specifically, methane. (Methane is the strongest greenhouse gas and is a surrogate gas that brings with it a host of toxic substances from the formation.)

Most of the complaints from this facility occur during load/off loading of produced water and flowback. At THIS LINK you can read communications between a TCEQ investigator, Joe Shine, and Williams environmental specialist, Jeff Stovall. I’m not saying that Joe Shine is looking for that revolving door. What I am saying is if he’s not looking for that revolving door, he is sure missing a good chance to be. In this correspondence he offers Williams a six-month pass to continue polluting the neighborhood.

ACF is one long series of “abnormal” events. When you live near fracking, abnormal is the new normal.

Nearly 93,000 Tons of Pollution Released From Upsets and “Emission Events” at Natural Gas and Petrochemical Plants in Texas

Natural gas plants, refineries, and chemical manufacturers in Texas reported releasing nearly 100,000 tons of sulfur dioxide and volatile organic compounds between 2009 and 2011, during malfunctions, startups, shutdowns, and maintenance.  EIP’s report identifies the largest emitters, and explains why reported releases are only the tip of the iceberg.

For link the to raw data click here.  The highlighted columns were added by EIP for analysis.