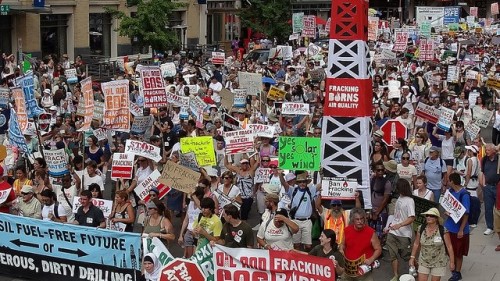 This photo shows some of the marchers at the Stop the Frack Attack National Worldwide Rally in DC last Saturday. The photo shows one block, the marchers stretched four blocks. Many people who attended the rally did not feel up to the march due to the extreme heat.

People from 30 states including, but not limited to Oregon, Wyoming, Montana, Idaho, Ohio, New York, Pennsylvania, West Virginia, Colorado, Texas, Arkansas, New Mexico, New Jersey, Idaho, North Carolina, California and even a delegation from Australia, traveled at their own expense to let our leaders know they must STOP THE FRACK ATTACK on American citizens.

Although there was no mainstream media coverage of the event, plenty of MSM was in attendance and conducted interviews and videoed the entire march.

Lack of MSM coverage won’t deter us. We will become the media.