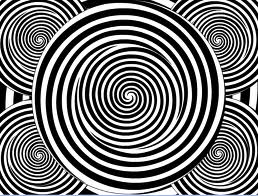 Stare deep into the image.

Clear your mind off all thoughts. You have nothing to worry about. Nothing concerns you.

Breathe and feel yourself letting go.

This is not news to those of us who were paying attention. For the rest of you, please try to catch up before it’s too late.

How the Oil Industry has Deceived the US with the Promise of Energy Independence
By Kurt Cobb | Thu, 10 May 2012

Oil rich countries are now dominated by state owned producers that usually have exclusive rights to exploit hydrocarbons for the good of their own countries. These countries are locking out the international and smaller independent companies.

The logic behind the deceit:

If the industry tells the public and policymakers the truth, then the industry’s attempt to vastly expand its U.S. operations will almost certainly fail. The truth is that the industry is having a difficult time finding good prospects in the limited areas overseas that it can now explore. So, it wants to return its focus to the United States and drill protected public lands and currently closed offshore areas so it can fulfil its primary mission, namely, making money for its shareholders and managers.

Of course, we will never have energy independence until we kick the hydrocarbon addiction. The only reason we aren’t in emergency lifesaving addiction treatment right now is the chokehold the Big Oil & Gas Mafia has on our government.

…the industry has found that the best way to distract the public from the industry’s unsavoury motives is to insist that its new zest for drilling America’s wilderness and offshore areas is all about helping the country achieve energy independence.

But we all know Americans are not distracted only by the energy independence deceit. Many Americans are distracted from the obvious inability of the Big Oil & Gas Mafia to operate in anything even remotely resembling an environmentally responsible manner and they look away from the suffering inflicted upon their neighbors lusting after the big deceit of great wealth from royalties.

Some Americans only care about the promise of lower fuel prices to pump into their gas guzzling hummers and SUVs. But that too is a lie.

The key fact the oil industry does NOT want the public to understand is this: No matter what happens, Americans will continue to pay the world price for oil and oil products including gasoline. Oil is a worldwide market, and oil products go to the highest bidder.

When talking about energy independence, the Mafia doesn’t want you to think about these things:

They do not want to distract us from using our American ingenuity to achieve true energy independence.