It’s true that low prices have slowed drilling and fracking for shale gas but if you think drilling issues are behind us, you haven’t been paying attention.

Industry has a plan that will jack prices right back up and that plan is called: LNG (Liquified Natural Gas) and CNG (Compressed Natural Gas).

Permits are pending that would ship nearly 20% of our domestic fracked gas to Asia. Read the letter Rep. Ed Markey (D, MA), Ranking Member of the House Natural Resources Committee, sent to Energy Secretary Chu expressing his concerns about the authorization of LNG exports.

The letter addresses concerns about increased prices for US gas and the probability of rapidly increased production when what they really need is a timeout  to improve technology.

Rep. Markey is not the only one sounding the alarm about price impacts from exporting domestic natural gas. Energy Policy Forum says that LNG exports will cause economic shock waves.

In his latest article, Unpacking The Shale Gas LNG Export Boom, Steve Horn give us a geography lesson that includes the industry’s big plans for LNG.

Corpus Christi is the site of one planned LNG terminal that will ship gas from the Eagle Ford Shale via a Koch pipeline and place it on the open market in Europe. That means, as Energy Policy Forum points out, domestic gas goes to the highest bidder. Period.

On March 14, Cheniere announced it would be filing for its second LNG export terminal in July or August of this year, this one in the scenic city of Corpus Christi, TX, 250 miles west of Cheniere’s already existing Sabine Pass LNG export terminal.

Just south of Corpus another permit for LNG export is pending at Freeport, TX where a Kinder Morgan pipeline will supply the terminal with gas from the Barnett and Eagle Ford Shales.

This fracked gas will come from Kinder Morgan owned pipelines running from the Eagle Ford Shale and the Barnett Shale, respectively.

Are you feeling used and dirty? It gets worse:

Though the industry has a slogan that reads, “Drill A Gas Well, Bring A Soldier Home,” the truth is far more complex than that easy-to-digest propaganda. The industry, as this article has made clear, is building up a complex armada of pipelines and LNG terminals, putting the “national security” lie to rest.

In November, I attended a media conference that has become known as the PSYOPS conference. But a lot more than industry’s use of military procedures and PSYOP trained ex military personnel in our neighborhoods was revealed at that conference. Chesapeake Energy has invested $1 billion so we can all drive CNG vehicles and fill them up with the CNG infrastructure they plan to install everywhere.

So if someone is trying to convince you that the threat of gas drilling is over, they are just flat wrong. The threat will never be over as long a we have hydrocarbons under us. Industry plans to pulverize every inch of shale that contains any hydrocarbons.

UPDATE: Just for Nick who is in the oil and gas business and is a regular commenter, here’s a table showing the historical average of annual energy subsidies for O&G, nuclear, biofuels, and renewables. Ahm, sorry but when you start talking about the free market, all your clothes fall off and you are standing before us in the comment section completely naked.

And here is another chart that shows it’s not just us. 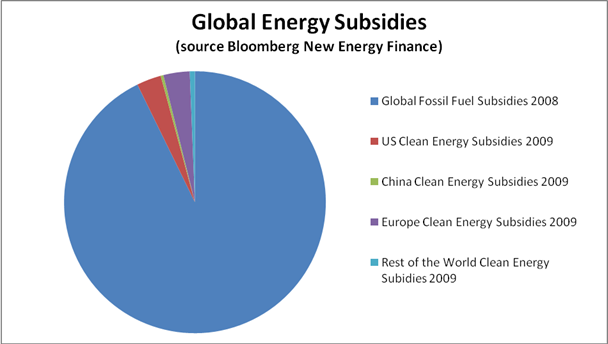 According to a recent analysis of the economics of energy by experts at the Imperial College London and the UK Energy Research Center electricity from wind power may, in five years, be less expensive than electricity from natural gas in the U.K. if current levels of government subsidies were transferred to renewable energy sources. LINK

Another update: Maryland Is On The Verge Of Becoming A Leader In Clean, Renewable Offshore Wind Energy. But they need a bill called the Wind Energy Act to pass. The Maryland Offshore Wind Energy Act would incentivize the development of up to 500 MW of offshore wind capacity by creating a carve-out in the state’s renewable energy portfolio standard to include that a specified amount of energy would be derived from offshore wind. And HERE is an article about how this project would create jobs and reduce the cost of electricity.

Wind and solar are ready to start taking the place of dirty fossil fuels. Our leaders just need the political will to fight the ENORMOUS influence the Big Gas Mafia has.