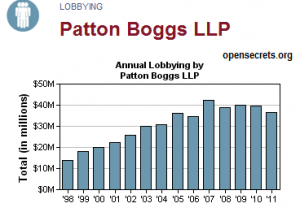 I’ve blogged about Patton Boggs before. They visit my blog regularly because they are a law firm and lobbyists for the oil and gas industry as well as the mining industry.

Patton Boggs are masters of misinformation and they don’t want us to know how damaging diesel exhaust is for health so they are threatening people to keep the findings of an $11.5-million government funded health study quiet.

Editors with at least four research publications say they have received a letter advising them against “publication or other distribution” of data and draft documents. The warning, including a vague statement about “consequences” that could ensue if the advice is ignored, is signed by Henry Chajet, an attorney at the Patton Boggs firm in Washington, D.C., and a lobbyist for the Mining Awareness Resource Group, which works on behalf of the mining industry.

The findings of the study could cause National Institute for Occupational Safety and Health (NIOSH) to change their designation of diesel exhaust as a “potential” carcinogen.

The diesel exhaust from unconventional shale oil and gas extraction is considerable.

You might remember that Aruba exposed Tim and Christine Ruggiero to 380 ppm of NOX which added up to 10,000 years of NOX exposure.

From the TCEQ investigation report :“Continuous operations of three diesel engines greater than 400 horse power at this site resulted in significant emissions of nitrogen oxides. An estimate of maximum nitrogen oxide concentration over one hour on the complaintant’s property was predicted using SCREEN3, an air dispersion model, to be 380 parts per billion.”

No enforcement action is taken by the TCEQ, but rather a recommendation

“Aruba should consider using nitrogen oxide controls on its diesel engines in situations where potential for off-site impacts are high.”

Obviously Aruba did not consider the TCEQ’s recommendation.