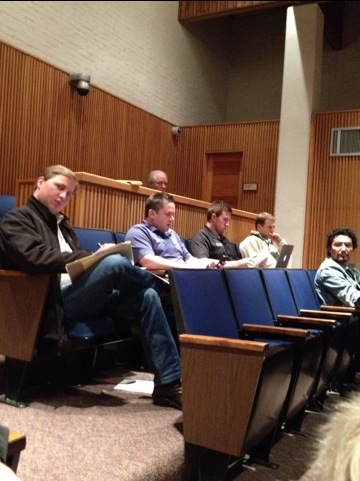 These are the Clean Resources boys waiting to speak at the Denton task force meeting.

Update: Oh my Gah! The Denton task force is a train wreck that is unbearable to watch. I’m not a technical expert but I knew more than they did. At least Vicki tries to gather enough information to present some good ideas.

Here is how the Denton task force works:

And all the decisions are final and can never be visited again.

Next week’s agenda: What difference does it make?

Here is how the Denton task force should work:

Don’t vote on anything or make any decisions until you have the information. Duh!

And everybody on the task force looks at Ed Ireland.  …like he is some kind of technical expert.”Oh, he’s so full of manure, that man! We could lay him in the dirt and grow another one just like him.” Ruby, from Cold Mountain.

P.S. One of the Clean Resources boys said he was too scared to talk because he was afraid to give his address. He also had the police escort him out. <-snicker-> No clue what that was all about.

P.P.S Ed Ireland called the Texas Railroad Commission to see if there were any cases of water contamination in Denton. I know you will find this hard to believe, Dear Readers, but the TRC said there has never been any contaminated water from drilling or fracking in Denton. Well, I guess if you don’t count all those non disclosure agreements and the two pending lawsuits over water contamination and the several people who have contacted me about it, then, yeah, Ed’s right.

This is in Denton