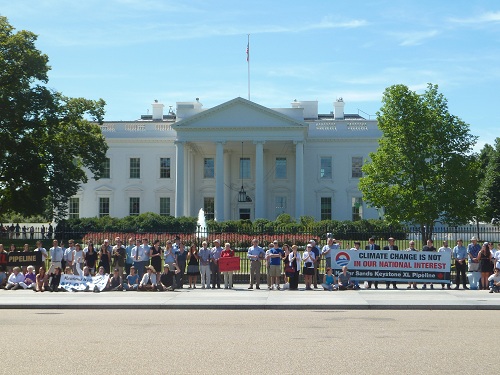 “Little attention was paid, because the German people, no matter how hungry, remained obedient.”
― Barbara W. Tuchman, The March of Folly: From Troy to Vietnam

I have never been arrested before, not even close. I have always warned my sons not to dare get arrested. So they were a little bit surprised to learn that I was traveling to DC at great expense to purposely get arrested.

Getting arrested in the Tar Sands Action was fun and it felt like the right and responsible thing to do. The scariest part of it was navigating the DC Metro. No, that’s not exactly true. It was the anticipation of navigating the DC Metro that terrified me, not the actual navigation.  The actual navigation, once I kind of figured it out, was fairly easy and now that I have sort of conquered that daemon, I feel empowered.

Here are a few Metro tips:

I arrived in DC on Monday afternoon and took two Metro trains to some station near St. Stephens Episcopal Church to attend the training. The first people I met were the Four Montana Grandmothers which included Margot Kidder the original Lois Lane. Tantoo Cardinal joined the Montana ladies somewhere along the way. Before the training started, Jennifer Krill, Executive Director, Earthworks, joined us. (Jen and I took this action as private citizens not as Earthworks employees. Nick Magel took the action on a different day.)

The training was highly organized and informative. See previous posts about training with pictures HERE and HERE. We did some role-playing, learned some chants and songs, practiced lining up and discussed what ifs. They went over everything imaginable including the possibility of wearing an adult diaper in case we were held for a long time without access to a restroom. (I decided to take my chances with that one and it worked out fine.) When one woman asked what to do with her release money and ID since she would have no purse or pockets, Kidder said, “That’s what your bra is for.” 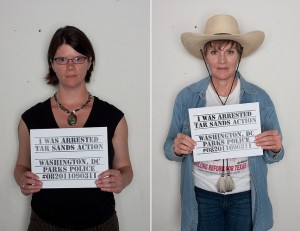 After a few speeches and some motivational exercises, we lined up and marched to our places in front of the White House. 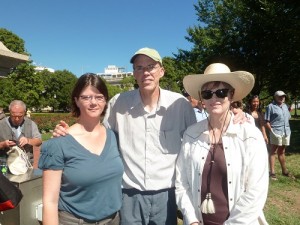 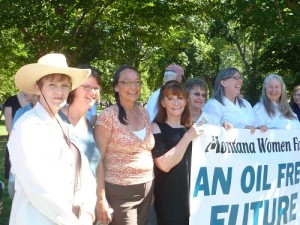 The first person arrested was Margot Kidder. The officer who arrested her was the only one we had contact with who had a bad attitude. He refused to help her up. (There is a video of Daryl Hannah’s arrest and the arresting officer gave her a hand up.) 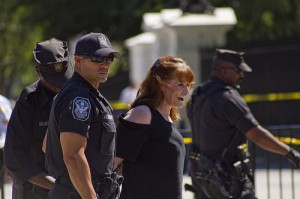 After Margot they arrested the young woman and young man leading the chants. Suddenly the group was silent—uncomfortably so—so I jumped up and started chanting. Sure enough, I was the next one arrested—arrest number six at 11:33 AM. 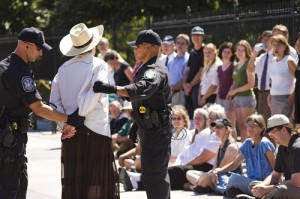 That’s when I learned why you should not wear a skirt to do civil disobedience. I received an extra thorough frisking. 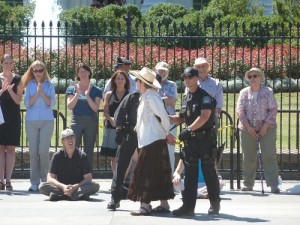 The female officer took my ID but stuffed my money back in my bra. Then they took my mug shot, handed me my ID and squeezed me into the police wagon with Kidder. It was very hot and close in there but we joked around with the cute police officers, told stories and had a pretty good time.

We were taken to the Anacostia Jail and placed in a holding cell. The police had tables set up with several officers to process everyone. They processed us in the same order in which we were arrested. They cut the handcuffs off, frisked us again and sent us to the tables for processing.

I paid my $100 fine for “failure to follow a lawful order.” As it was explained to me: Paying the fine is not an admission of guilt. It’s described as similar to paying a traffic fine but seemed more like a bribe to me. I was released at 12:46 PM.

Outside the jail, we were greeted by the Tar Sands Action organizers with applause, thanks, drinks, snacks and a ride back to the Metro. I waited for Jen who was arrest number 30-something.

Then we headed back to town on the Metro and learned about the earthquake. But that’s another story.

If you are on-the-fence about taking this action, I encourage you to get off the fence and go “sit so Obama will stand up.” I was tired for a couple of days because I got dehydrated but it was well worth it and we actually had a lot of fun. If I can do it so can you! 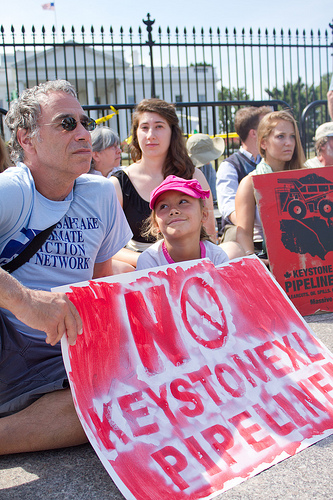 A daughter admires her father for his bravery and for looking out for her future. 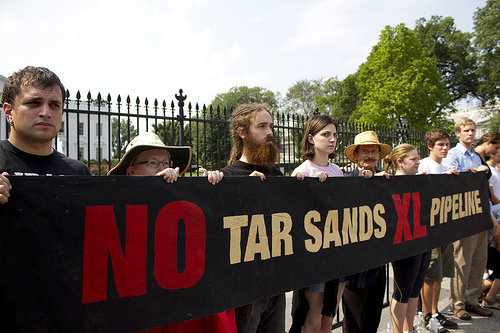 A veteran and my friend Ben Kessler from Denton, Texas standing with other young people from Denton. 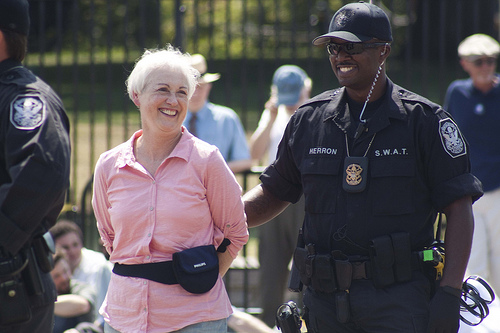 It is a bit dispiriting that a scientist of Hansen’s calibre feels the need to get arrested in protest. You would hope the American political system would be able to incorporate scientific knowledge in a more ordinary way, and that concerns like abrupt or runaway climate change would be incorporated into undertakings like the U.S. State Department’s environmental review of the Keystone XL pipeline.

“If the injustice is part of the necessary friction of the machine of government, let it go, let it go: perchance it will wear smooth–certainly the machine will wear out… but if it is of such a nature that it requires you to be the agent of injustice to another, then I say, break the law. Let your life be a counter-friction to stop the machine. What I have to do is to see, at any rate, that I do not lend myself to the wrong which I condemn.”