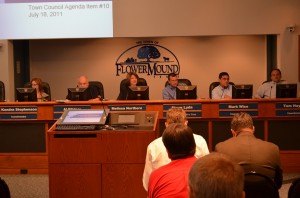 The majority of the citizens who spoke were for passage of the ordinance. One citizen was against the ordinance until they brought in “experts” like the Texas Railroad Commission (cough). Other citizens expressed regret that Vapor Recovery Units (VRU) were not mandatory. I totally get it about the VRUs. VRUs are like the Talenti Gelato under the dark chocolate syrup under the cherry. People who live in the Gas Patch lust for them.

The tough thing about an ordinance is it’s not worth much if it won’t hold up in court when the Big Gas Mafia sues. So far, Flower Mound has successfully defended all lawsuits, foreign or domestic. Mandatory VRUs are one of those items that industry will fight hard against. I believe Tim Ruggiero hit on the reasoning in his speech at the TCEQ public hearing last Thursday. (BTW, where were you at that hearing?) Industry will fight VRUs because the cost is not returned for several months to a year or more. Tim’s theory is that industry knows these wells won’t last long enough to make the VRUs worth their time.

If Flower Mound residents truly want VRUs, people with health impacts–we know you’re out there–should come forward and let those impacts be documented the way they were in Flowback. Documentation of this kind is a huge factor in the success Dish has experienced in curtailing emissions. Simply put: there needs to be a basis.

The great thing about the Flower Mound ordinance is the part about emission standards that industry won’t be able to meet unless they install VRUs. That’s called skinning a cat from any angle. (No cats were harmed by the Flower Mound drilling ordinance.)

The weird moment of the night–weird moments are mandatory at council meetings–came when Kendra Stephenson objected to the ordinance because some “expert” that she knew was not consulted. No one seemed to know anything about this expert and Ms. Stephenson couldn’t or wouldn’t reveal his super secret identity. The city manager was questioned about notifications of an available “expert” but I guess he didn’t have the super secret decoder ring because he could find no correspondence about said “expert.” I swear! That’s how it went down from where I was sitting.

Stephenson answered “present” when they called her name for the vote. I think she might have meant abstain which can be registered as a protest vote. Anyway, what it all boils down to is a 4 to 1 vote to pass the most excellent drilling ordinance yet.

Everyone was on the same page about the ordinance being a living document that will require continual updating. Another neat thing about this ordinance is some updates occur automatically as Federal and State rules change.

The Flower Mound ordinance took a lot of hard work and dedication. I commend all the members of the Advisory Board.