I’ve already read Clifford Krauss’ “Shale Boom in Texas Could Increase U.S. Oil Output” in the NY Times so you don’t need to keep forwarding it to me. And, no, I’m not going to provide a link to that shoddy reporting job. If you want to read it, use Google.

Here’s what Krauss didn’t write about: When he was in the Barnett Shale last year we had several phone conversations and exchanged quite a few emails. I provided many contacts for him to interview. His conclusion, shared with me over the phone: The biggest story never told in the Barnett Shale is the intimidation industry uses against citizens. Why didn’t you ever write that story, Krauss?

Hey Krauss, why didn’t you write about the long-term environmental damage that will carry a heavy price tag for taxpayers once this boom and bust, drill, baby, drill is over? Why didn’t you even mention that this environmental damage will grind our local economies into the dust and create new faces of environmental injustice? Isn’t that part of the whole economic picture?
Dear Readers, do you remember Steve Brock in Montague County who has flammable water? You probably saw the report about him on WFAA. Actually, his entire neighborhood has varying levels of water contamination, all victims of environmental injustice. This contamination was traced back to a pit used in the 70s by several drilling companies to dump drilling waste. (Nothing for you to worry about though because it’s not like they still use this primitive practice. Oh wait! Worry NOW!)
Brock tried to sue because it’s not good to bathe babies in flammable water that has high levels of petroleum chemicals–causes angry rashes. He lost his case because the two-year statute of limitations had run out. It wouldn’t have made any difference anyway because all the companies that once used the pit are long, long gone now. Poof! Money made. Water ruined. Long gone. Guess who pays?
The NY Times article invites us to worship the almighty shale in Texas. Praise God and the Barnett Shale! Now you can add the Eagle Ford Shale in there too because they have oil. Hallelujah! Build a tall alter so we can give thanks. Oh yeah, they’ve already done that. There are alters all over the place.

Now days, rather than rape and pillage other countries like Nigeria, the oil and gas industry can create sacrifice zones right here at home. If an industry has enough money to create pretty, pretty ads on the TV that tell about how wonderful and clean you are, then you can easily turn whole areas–Metropolises even–into sacrifice zones. You can turn neighbor against neighbor and can create third world country situations without leaving the country. Think of that! No need to get passports! 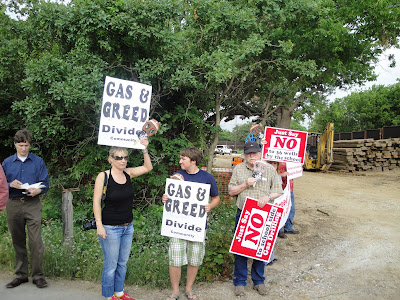 And people will thank them for it! Some will stuff their pockets and bank accounts from the money they earned developing these toxic neighborhoods. The Big Gas Mafia will help enshrine them on the boards to facilitate the further destruction. 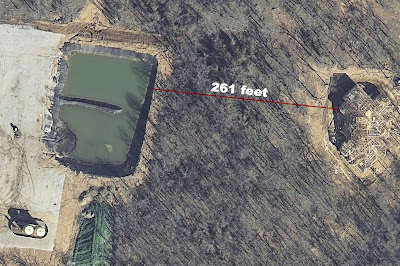 Drilling waste pit uphill from Knoll home under construction
during June 2007 when we had over 30″ of rain.
Other people will trade their job for your family’s cancer. They will sing their praises while turning their faces away from the putrid conditions, sick children and families who are driven from their homes. They will happily continue down the path that causes our own demise.
When all the gas and oil are gone and all the water is depleted or contaminated, who will give our children a drink?

Oh no! Look who owns all the water!

Pickens owns more water than any other individual in the U.S. and is looking to control even more.

That the industry that is ruining the water.

Another major theme of the meeting was making money from water technologies for mining. During a session chaired by John Veil, the audience heard how producing water for mining and cleaning it up after it’s destroyed will be the Promised Land for the industry. They discussed with glee how fracked gas, known in Europe as shale gas, uses millions of gallons of water that can be produced through desalination or provided in other ways. And after it’s horribly polluted, the industry can benefit from “processing” it so that it can be “reused” by the public. Sounds like a science fiction nightmare.

Maybe they will give our children a drink. Think?

When will you write about that, Krauss?