On January 5, a bipartisan group of 32 members of Congress, who belong to the Natural Gas Caucus, sent Salazar a letter imploring him to resist a hasty decision because more regulations would “increase energy costs for consumers, suppress job creation in a promising energy sector, and hinder our nation’s ability to become more energy independent.”

A week later, 46 House Democrats followed up by signing a letter to Salazar urging him to at least adopt the disclosure requirement because, as Rep. Maurice Hinchey, D-N.Y., said, “communities across America have seen their water contaminated by the chemicals used in the hydraulic fracturing process.”

Included in the link above is a list of the prostitutes.

Until we have public funded elections, we can expect the majority of our elected officials to be paid protectors of corporations.

I think we should go ahead and change our flag to a more accurately reflect our country. 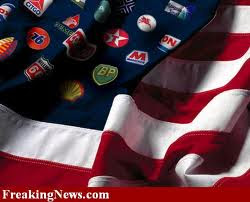