The oil and gas industry currently receives $4 BILLION in corporate welfare every year.

Oil production is one of the most heavily subsidized businesses in America, with tax breaks available at almost every stage of the exploration and extraction process, according to an analysis by The New York Times. The tax breaks average about $4 billion a year, based on various government reports, and are preserved by the oil industry’s massive political influence.

That industry is paying much lower taxes too–9% for capital investments versus 25% generally for other businesses.

According to the report in the NY Times, As Oil Industry Fights a Tax, It Reaps Subsidies, federal officials are considering levying a new tax on petroleum production to help pay for clean up in the Gulf. They also want to cut industry tax breaks by $20 billion over the next decade. Of course industry’s lobbying group, American Petroleum Institute, is squawking about job loss. This choice that industry continues to present–free rein to pollute or jobs–is a false one. The oil and gas industry is making record profits. Since 2008 industry has spent $340 million lobbying our lawmakers so they can afford to do things right. And if they can’t or won’t they should pay the price just like regular citizens do.

From the NY Times article:

But some government watchdog groups say that only the industry’s political muscle is preserving the tax breaks. An economist for the Treasury Department said in 2009 that a study had found that oil prices and potential profits were so high that eliminating the subsidies would decrease American output by less than half of one percent. [that’s 0.5%]

“We’re giving tax breaks to highly profitable companies to do what they would be doing anyway,” said Sima J. Gandhi, a policy analyst at the Center for American Progress, a liberal research organization. “That’s not an incentive; that’s a giveaway.”

Recently Texas Senators Hutchison and Cornyn voted against a bill that would cut some of the Corporate Welfare to the oil and gas industry. Just FYI:

Here is a graph showing the oil and gas industry Corporate Welfare. 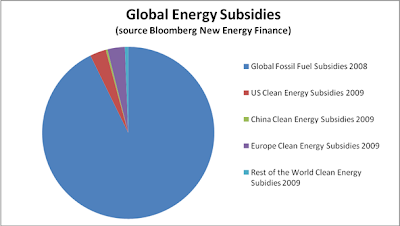