What you need to realize, dear readers, is that what happens offshore also happens onshore but it’s much easier to cover up onshore.

Just last week, another lunatic cyclist sent me these pictures of a Carrizo well in the Argyle/Bartonville/Lantana area. You will notice that the worker is wearing a gas mask/respirator. 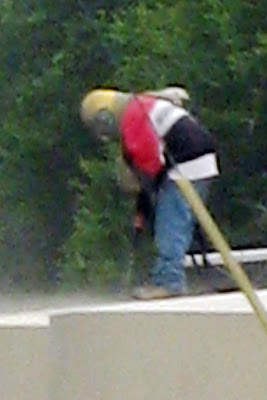 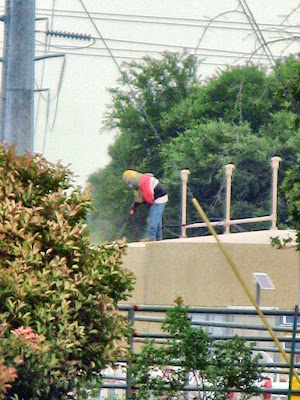 The day these pictures were taken, 4 calls complaining of strong chemical/gas smells were placed to TCEQ. The cyclist reported that the odor was extremely strong and almost suffocating when he took these pictures.

In the Texas Railroad Commission’s universe where Runner Susan’s pool water flows uphill and bubbles that ignite are normal settling, it’s normal for people to wear gas masks when they use a power washer.

Here is what we have learned in the Barnett Shale:

You can take that to the bank. If you wake up and notice workers out power washing tanks at 5:30AM in subfreezing weather, you can bet that there has been a spill. See, that stuff leaks down the side of the tanks and causes corrosion so they need to wash the tanks to conceal the evidence, unless, of course, it’s Shanty Town. At Shanty Town they don’t care about corrosion.