In North Texas we have the most drilling, the worst regulation and the highest infant mortality. Anybody see a connection?

Don’t gasp when you see this picture Don Young took yesterday. It’s obvious that Fort Worth has been sacrificed to the shale. No one, no business is going to move to Fort Worth and risk their lives to live in that hell hole. Oh, you’ll have to squint and look through the smog to actually see Forth Worth on the horizon. Today was also a fairly warm day with temps reaching 82 degrees. HIgher temps and gas well emissions are not a good combo as you can see by these photos taken near downtown Fort Worth today at 6:30 PM CST. Just wait until July rolls around.

Meanwhile, the mayor of Fort Worth, whose income depends on gas drilling, recently announced the creation of a task force to try and figure out if gas drilling is a contributing factor to our compromised air. Gas drillers say that the air is actually CLEANER since drilling began in Fort Worth. They are also well-represented on the task force. 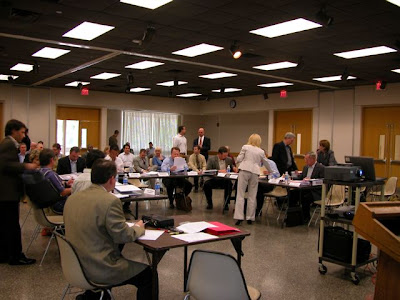 Note the bald-headed man at center, rear, is Ed Ireland, head of the Barnett Shale Energy Education Council, a lobbying group for gas drillers in the BS. The blonde woman with her back turned is the asst. attorney for the City of FW who told me in 2005 that the city was not required by the state to consider air quality in writing the drilling ordinance and would, therefore, not do so.

For too many babies, Fort Worth is not a healthy place

Infant mortality is a robust indicator of the health of a community. It is measured as the rate of infants dying in their first year of life per 1,000 live births.

By that measure, Tarrant County is the least healthy urban county in Texas.