Benzene found 9 times over the limit.

From Fort Worth resident, Jim Ashford.

I have filed a complaint with TCEQ against Chesapeake Energy/Mid-Stream pipeline for excessive pollution and contamination of the air at my residence.

On or about January 21, 2010 Wolf Eagle Environmental tested the air emissions at my home at 6209 Riverview Circle, Fort Worth, Texas 76112. The findings indicated levels of benzene at 1.77 parts per billion by volume. Concentrations of benzene found in this test exceed TCEQ Long Term ESLs on an annualized averaging basis, and according to TCEQ, exceed Fort Worth background ambient levels of benzene of 0.2ppbv. Also, the presence of specific compounds (benzene, chloromethane, toluene, and m&p xylenes) found in this test, and in the concentrations detected, is considered out of range for normal ambient conditions.

Wolf Eagle Environmental believes compounds present in this test are the result of gas mining and exploration, based on reasonable scientific probability. A copy of their report has been sent to TCEQ. 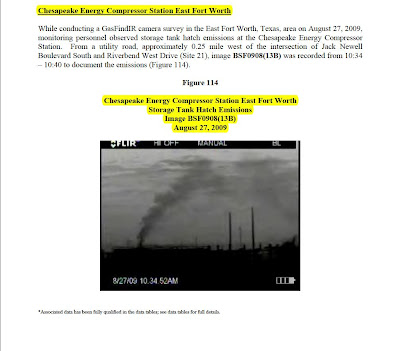 The location and image described is ½ mile or less from my residence. This documented image from TCEQ was taken approximately 5 months before the air testing by Wolf Eagle Environmental in my backyard.

The gas drilling industry downplays the TCEQ reports that indicate the levels of benzene exceeding the long-term health concern levels as being of serious concern. Doing so is a reckless and negligent act for which they should be admonished.

The long-term health concern levels indicate an issue for exposure of over one year according to TCEQ. In the situation that I have described above, my concern is I have lived at this location over 5 years or well beyond the one-year concern level established by TCEQ. Additionally, many of the health issues from these chemicals may not develop until years later.

When the gas drilling industry, TCEQ or the City of Fort Worth officials state the air is safe to breath in Fort Worth, the truth is they are ignorant of the facts, they are lying or they don’t care. I have had the air tested and it contains dangerous levels of benzene at my home in East Fort Worth.

The air quality problem has been known for a number of months and nothing is being done to correct this known dangerous situation. Until I had the air tested, no one thought it was important enough to tell me or even wanted me to know the truth.

If the air in my neighborhood contains dangerous levels of chemicals from drilling in the atmosphere, how many other neighborhoods in Fort Worth have the same problem?

In a densely populated area where hazardous toxins are being emitted primarily by one industry, the government we citizens rely on, has ignored, sidestepped and continually denied the existence as being a problem.