When the Texas Railroad Commission inspector arrived at the scene of the latest toxic drilling waste spill at Tim and Christine Ruggiero’s home, he arrived with the Aruba Petroleum representative.

Two hours later, a bulldozer showed up in the Ruggiero’s pasture to spread the contents of the drilling waste pit across their pasture. Prior to the latest complaint about the latest spill, the Ruggiero’s were told the pit contents would be completely removed from their property for disposal.

“This is the remains of Aruba Petroleum’s waste pit. The liner is torn, and some of the contents have been pulled out and spread around on our surface. They spilled oil, dumped sewage and who knows what else in this mud.”

The pit contents spread on the pasture:

Aruba Petroleum has lied……again. I sent a letter to their president demanding that this waste pit and contents be removed. It has sewage, oil and who knows what else in it. It’s been removed, all right – and spread around the surface of the pasture. You can still smell the hydrocarbons and sewage. They lied to me and to the TRRC because they told both of us it was going to be “Hauled Away”. It’s been ‘Hauled” about 200 feet away from the pit.

This is what the pit looked like a couple of weeks ago. 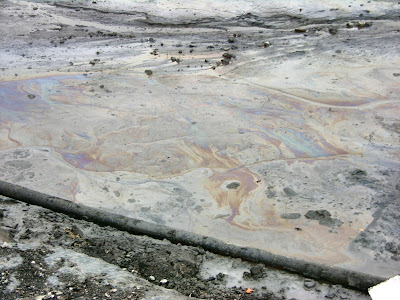