In the Barnett Shale area, 25% of 4th grade children have asthma! 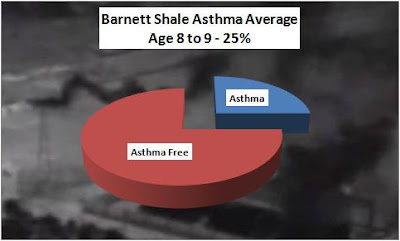 That compares to a statewide average of 7.1%. 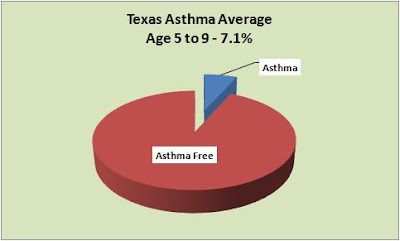 These numbers come from a first of its kind project led by Cook’s Children’s Health Care System.

In D-FW, ‘sobering’ asthma numbers
While asthma has long been prevalent in Texas, the survey shows its high incidence in Tarrant, Hood, Parker, Johnson, Wise and Denton counties. The disease peaks at ages 8 and 9 with 25 percent affected. But it remains a serious health issue among older children, with 1 in 5 ages 10 to 14 diagnosed with the disease. Twenty-five percent is an awfully high number, said Dr. Rebecca Gruchalla, chief of allergy and immunology at the University of Texas Southwestern Medical Center at Dallas. It’s possible the survey results include children who have been mislabeled as having asthma because they had wheezing and coughing, she said.

Is it coincidence that the counties with the highest numbers of childhood asthma coincide with the core and most heavily drilled areas of the Barnett Shale?

Barnett Shale operators profess their desire to be a “good neighbor” while they willingly contaminate our air and harm public health. Most of the harmful emissions can be prevented but industry refuses to voluntarily take those steps. We are therefore dependent on our legislators most of whom receive large campaign contributions and favors from industry.

Suspend all disbelief. Step into the bubble