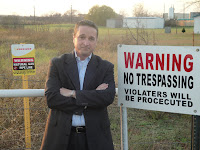 DISH, Texas – The mayor of one of North Texas tiniest towns received a big honor.

Dish Mayor Calvin Tillman was just named a 2009 Gold Star Texan. The award is given by the Texas Progressive Alliance.

Tillman led his town in funding air testing near natural gas facilities. The results led to more study by TCEQ and a quicker response to citizen complaints.