Have you ever heard of Americans for Prosperity? AFP is an organization that wants to: “expose the ‘hot air’ in global warming.”

Here’s a little diagram I drew to help you understand why Americans for Prosperity the Continued Prosperity of Koch Industries and Other Big Oil Outfits would invest heavily in “hot air.” 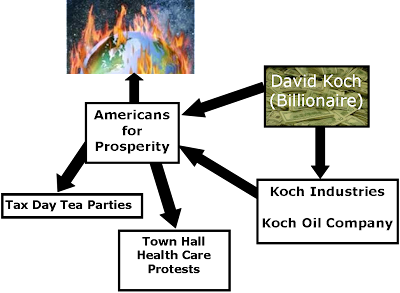 From the diagram, you can see that Americans for Prosperity the Continued Prosperity of Koch Industries and Other Big Oil Outfits was founded by David Koch.

Americans for Prosperity was founded by David Koch, the billionaire co-owner of Koch Industries, the largest privately owned company in the United States (Georgia-Pacific became part of the family in 2005), and this country’s leading corporate environmental criminal.

Faulty Koch pipelines resulted in more than 300 oil spills in five states during the 1990s, which led to the corporation paying landmark penalties. A pipeline explosion in Dallas in 1996 that killed two teenagers cost the company more than $300 million.

Facing a 97-criminal count indictment and possible fines in the hundreds of millions for knowingly releasing large amounts of the carcinogen benzene at its Corpus Christi, Texas, refinery, in 2001 the U.S. Justice Department under George Bush II dropped all but one charge – concealment of information during a three-month period in 1995. The company was fined $10 million and ordered to pay another $10 million for community service projects in Corpus Christi.

If you only understand only one thing about industry propaganda, please understand this:

Industry will do anything,

to maintain their free pass on polluting for profit.

If you are curious about the truth, you will click over and read Blowing hot air about Global Warming.

The article’s closing is a question I’ve asked many times:

“Frankly, I’m concerned that the common sense of all this is not immediately apparent to the majority. Suppose climate scientists are wrong but we do something about global warming anyway. What will we have lost? Nothing. We will have gained. We will leave a smaller environmental footprint and enjoy cleaner technologies. Cleaner air. Cleaner water. Less cancer. And so forth. But suppose the climate scientists are right and we do nothing or fail to do enough. Then we are in a deep, dark hole.

“Of course, we’re already in a hole. Best to stop digging and find a way to climb out.”