No big surprise but radioactive water has now been found in Wise County. It’s in Chico, of course, because that’s where some of the older gas wells are.

Elston Johnson, TCEQ said it’s nothing to worry about because:

Johnson says the public would have to drink a lot of radioactive water for years to elevate their risk of getting cancer.

Wilma Subra, MacArthur “Genius” Award winning scientist and Dr. Theo Colborn say that pathway of most concern is air. NORM is a bone-seeking carcinogen with a 1622 year half-life. If NORM is in your water then it will also be in the steam from the water when you do any of the following:

I’m just guessing but it seems reasonable that inhaling vapor from water that contains high levels of NORM might not be a good thing. You know, 2 + 2 being 4 and all that.

In 2004, the Texas Railroad Commission gave a NORM seminar in San Antonio. I’ve posted slides from that seminar previously. One of the important points from the seminar is:

Given that, it seems reasonable to assume that NORM levels on the chart below would be higher than they were in 2000 when the NORM survey was conducted. 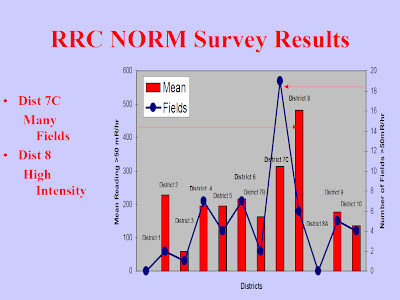 Another important note: Industry self-regulates for NORM. Shocking, I know.