I just received this email from Don Young:

CBS 11 News will have a live update at 6 pm CST from Carter Avenue to announce that Chesapeake has submitted a plan to TXDOT that will move the gathering line North of I-30.

Rumors of this have ben floating for days. Wendy Davis has told several people privately that a deal has been reached. Now for the devilish details and the Chesapeake rah-rah show.

Many thanks to Steve Doeung for being the lone holdout who allowed time for this to happen. He is the hero here, NOT Chesapeake.

Steve is the one who wrote the letter in this post: 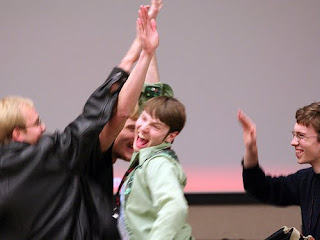 Gas pipeline in Fort Worth would run along Interstate 30, not under neighborhood

The pipeline will run along I-30 instead of through Carter Ave. front yards.

The state highway department has agreed in principle to allow a natural gas gathering line to run along Interstate 30 east of downtown, eliminating the need for a controversial pipeline beneath peoples’ front yards on Carter Avenue.

I’m not clear on the “in principle” part.