The press release was embargoed until midnight so I stayed up to post it last night.

DIMOCK, PA – Fifteen families living on Carter Road in Dimock Township, Pennsylvania, located in Susquehanna County in the northeast region of the State, plan to announce on Friday, November 20, 2009, the filing of a civil lawsuit in Federal Court in an effort to require a major gas and oil drilling company to repair the damage that has occurred to themselves, their homes and properties as a consequence of drilling for natural gas.

Some pictures from Dimock: 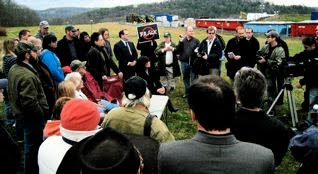 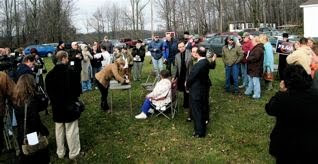 Seated, several residents of the Carter Rd. area of Dimock, PA. At the extreme edges can be seen on residence and about 125 feet away a drilling pad.

Here’s the media coverage from today:

“We’ve been lied to, we’ve been pushed around, and enough is enough,” said Julie Sautner, whose drinking water began showing high levels of methane, iron and aluminum in February and who is receiving fresh water deliveries from Cabot. “We need to push back.”