Oh, it’s just salt water. That’s all. And traces of “other elements.”

But, what about all those fires at salt water disposal wells? I didn’t know salt water would burn. Throw a match in the “The Great Salt Lake in Utah” and see what happens. I’m pretty sure it won’t burn.

One expert agrees, comparing the water to the salinity of the Great Salt Lake in Utah. The sample “strikes me as a rather benign oilfield byproduct,” wrote Tom Brikowski, a hydrologist at the University of Texas at Dallas, who was asked by The Dallas Morning News to review the analysis.

I would check this “experts” required form disclosing his significant financial interests. He may have forgotten about this or maybe, because colleges and universities sometimes participate in pollution activities, he just thought it best not to mention:

Produced water, which is the correct term for the “salt water” is never “benign.” Just a small amount will ruin drinking water and kill everything that grows. Posted on this blog are numerous examples of destruction from produced water.

Below is a satellite image showing an illegal discharge of produced water on the Wise/Montague County line. The large red circle shows that all vegetation is dead and the small red circle is the disposal well where the produced water should have gone. This illegal discharge happened in early June 2008 and you can see pictures HERE. The land is still completely barren. 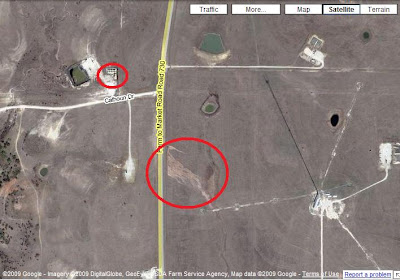 HERE you can read about another incident of illegal dumping of produced water. If you follow the links and scroll down a bit you can see many pictures of damage from this “salt water.”

And last, but not least, please read the permit that is required for a disposal facility for this “benign” produced water.

Flower Mound residents should not make such an important decision based on one sample! They need to consider samples taken over a long period of time and from different well locations!

UPDATE: From a Flower Mound resident:

No one from the town was there. Williams has not given the town authorization to go and take a sample of their own. I am going to post that now. Williams did this test themselves back in August right when they were asking the town to allow the waste water pipelines.