This is the most disgusting appeal to greed that I’ve seen yet from the natural gas industry. In this letter, Range Resources asks their royalty owners to make a choice:

This is a false choice! Royalty owners can have it all: clean air, safe water, respectful, fair treatment of surface owners and free money.

Do not be fooled! It is NOT your royalties that are at stake here. It’s the outrageous compensation of natural gas CEO’s that worries them when the necessary regulations are passed.

SOURCE
The chairman and chief executive of independent oil and gas company Range Resources Corp. received compensation valued at $7.4 million in 2008, a 23 percent increase from the previous year, according to an Associated Press analysis of data filed with regulators Monday.

But the bulk of his compensation came in the form of stock- and option-based awards valued at $5.7 million when they were granted in 2008, up 29 percent from similar awards granted during the previous year. 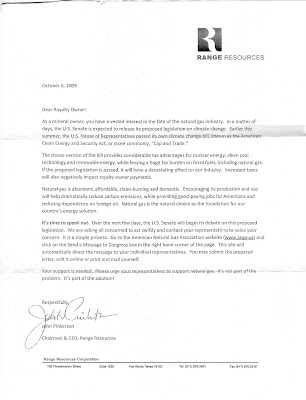