Star-Telegram Letter to the Editor

As a practicing geologist with more than 30 years of experience, I am confounded by your articles on the earthquakes occurring in Cleburne and the Mid-Cities. A little homework by Chesapeake Energy and the Star-Telegram’s reporter should have uncovered the story of Denver’s sudden earthquake activity from 1962 to 1965. It tells the story of what is happening here.

About 165 million gallons of liquid waste was injected into a nearby disposal well by the Rocky Mountain Arsenal. Small earthquakes were the result. Of course, the Army denied any connection. The liquid increased fluid pressure in rocks, thus decreasing friction across fault planes. A histogram of the data shows a direct causal relationship between fluid injection and small fault movement. When injection rates were decreased or stopped, fault movement subsided.

An experiment near an abandoned oil field near Rangely, Colo., suggested similar results.

Chesapeake Energy is prudent in shutting these wells, but it should stop denying the obvious. Even my students at Tarrant County College, where I taught for 10 years, were introduced to these facts. 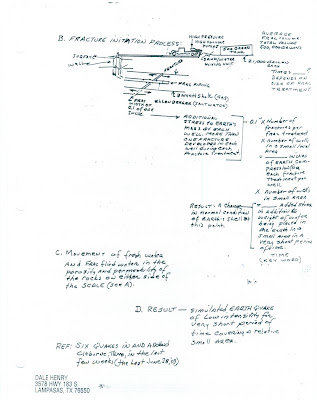