“This is another foot in the door for these private corporations in a public entity,” he said. “I hope they are not just learning about how to drill but the impact that drilling has,” such as on the environment and wildlife.

This is the 4th such academy and–wouldn’t you know it–the other three are also in Texas.

Robert Weissman of the Washington, D.C.-based Commercial Alert group, which monitors private and commercial entities in public venues, said the academy is one of the most extensive industry-involved programs he knows of in a public school. Most such programs usually involve career-oriented charter schools, he said.

“This is a bad thing . . . because it is giving them the power to set the curriculum, to teach students to think the way they want them to and to use the school as their private training ground,” he said.

A perfect picture of conflict of interest. Taken by Don Young. 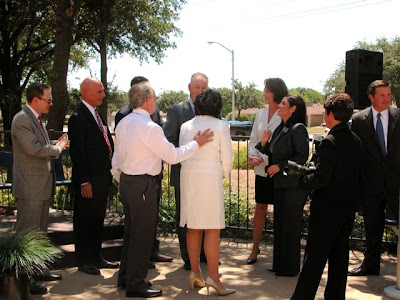 A letter sent to FWISD Superintendent and SW Principal:

I would urge you and Yassmin Lee to do further research on this matter. In my opinion, the actions of our Mayor prove him to be a loyal servant of the gas industry. The fact that Fort Worth still does not have any Master Plan for our City should be an obvious example of our Mayor’s agenda.

The education of our children and young adults demands that “objectivity” be the first and foremost concern in any learning environment. If you have any dedication to this concept whatsoever, you would not allow this program to move forward without involving other institutions – such as the NRDC – which have worked long and hard to shed light on the reality of gas drilling in urban settings.

The gas industry has spent decades lobbying Congress in an effort to eliminate any and all accountability to those that they effect. Most of their exemptions regarding our health and our environment are based on the needs of our country during World War II and were never intended to extend to gas drilling in an urban environment.

Our children and young adults are very susceptible to the “impressive” tactics of large corporation. You owe it to them to provide a balanced and thought provoking education in ALL MATTERS.

With this in mind, I would urge you to contact Amy Mall at the NRDC. I have listed her contact information below as well as a link to her excellent report on the long term effects of gas drilling.

Please do not let Fort Worth become known as the training ground for more troops that will blindly fulfill the wishes of the gas industry. This would be a crime in the true sense of the word.