Imagine waking up one morning and having no safe water at all. In a recent radio program about Peak Water, Maude Barlow said: The day will come–mark my words–when every single thing we do will be measured against what it does to water. For people in Midland, Texas, that day is here.

Hexavalent Chromium contamination is spreading in the groundwater used by some Midland, Texas residents and environmental investigators say the mounting evidence points to the oil and gas industry. Affected residents say they have proof that hydraulic fracture giant Schlumberger is responsible.

Erin Brockovich was in Midland investigating and her team is still in Midland. (video)

“The only difference between here and Hinkley,” Brockovich said, “is that I saw higher levels here than I saw in Hinkley.”

Hydraulic fracturing is a process where 1 to 5 million gallons of potable water, mixed with chemicals and sand are pumped under pressure down the drilling hole to release the gas trapped deep in the earth. According to Victor Carrillo, Railroad Commission of Texas, 90% of all U.S. oil and gas wells undergo hydraulic fracturing to stimulate the production of oil and gas.

Bob Bowcock, an environmental engineer investigating the Midland County contamination with Brockovich said, “The culprit is definitely oilfield activity.” In an earlier statement to Big 2 News in Midland, Bowcock said Brockovich investigators have “evidence” that Schlumberger is to blame.

In Louisiana, Schlumberger was fracturing a Chesapeake Energy well when neighbors captured on video a yellowish-green substance sprayed on the ground in a nearby pasture full of cattle. Sixteen of those cattle died a gruesome death as neighbors watched. The investigation seems to be at a standstill.

The problem is that both Chesapeake and its contractor doing the work Schlumberger, say that a lot of these fluids are proprietary, said Otis Randle, regional manager for the DEQ. “It can be an obstacle, but we try to be fair to everybody,” he said. “We try to remember that the products they use are theirs and they need them to make a living.”

In the meantime, over 40 families in Midland are without safe drinking water and the contamination, which has already spread 1.5 miles from ground zero, is spreading through the aquifer at 1000 feet per year.

Yesterday, I spoke with Sissy Sathre who is the unofficial point person for the Cotton Flats community in Midland and the one responsible for Erin Brockovich’s involvement. Residents have water filters issued by Texas Commission on Environmental Quality but there are many problems including frequent filter failures. Residents fill a white bucket to test the color of their water before use. If it’s yellowish-green, they know it’s not safe to use.

Cotton Flats residents have many health problems including rashes, burning eyes, ear aches, head aches and cancer. Their animals also have health problems. Most residents are afraid to use their water even to wash dishes because of the residue. They use paper plates, reduce bathing and don’t even allow their dogs or children to play outside for fear of stirring up contaminated dust.

And once the public hears the story, and they’ll say: well why aren’t we out there monitoring?

We can’t monitor until we know what they’re using. There’s no way to monitor. You can’t.”

Legislation is pending that will close the Halliburton Loophole, but we need more support for these bills. Please ask your member of Congress or Senator to co-sponsor these bills.

A bill to amend the Safe Drinking Water Act to repeal a certain exemption for hydraulic fracturing, and for other purposes.

H.R. 2766 – Fracturing Responsibility and Awareness of Chemicals Act of 2009

To repeal the exemption for hydraulic fracturing in the Safe Drinking Water Act, and for other purposes.

Our Congress members are being mislead by industry. ProPublica investigative reporter Abrahm Lustgarten exposes industry for their use of “fuzzy math” and misleading statements to confuse Congressional members. In the first quarter of 2009, the oil and gas industry spent $44.5 million lobbying against regulation. Last year they spent $129 million. In addition to lobby money, the industry PR machine is at full tilt. They’re trying to claim that hydraulic fracturing regulation should remain at the state level and spinning it as a state’s rights issue.

In the meantime, Cotton Flats residents know full well the meaning of “Your Money of Your Life” and they are hoping to soon have the essential ingredient to life: safe water. 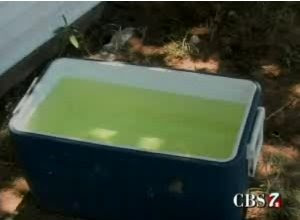 That should keep Schlumberger, API, DOE and all the rest of you soulless industry assholes busy.