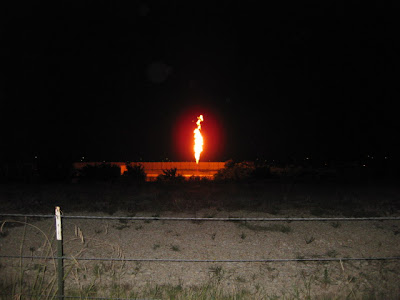 This picture was taken from Harris Parkway last night. The roar of the flare was quite loud. The closest houses were those on Lomo Alto Dr. The pad is quite large and appears to have at least one other completed well.

I gave a talk to the citizens of this area early this year or late last year. The PR dude from Chesapeake, Kevin Strawser, and his entourage were there. He was asked if he wanted to comment or present anything after I finished. He got up in his slick suit and said, Gosh, he hadn’t been prepared for this! But he just didn’t think things were as bad as I had said. And that was it.

Now this is what they’re getting.

Flaring
Flaring is the practice of burning gas that is deemed uneconomical to collect and sell. Flaring is also used to burn gases that would otherwise present a safety problem. It is common to flare natural gas that contains hydrogen sulfide (i.e., sour gas), in order to convert the highly toxic hydrogen sulfide gas into less toxic compounds.

It’s also very loud. This video is from another Chesapeake well.