Remember those cattle that died when they drank the frack fluid that spilled into their pasture from the Chesapeake Energy drill site in Louisiana? I thought you might like an update on how the investigation is proceeding. Yeah, so would I and so would a whole bunch of people including the writer of this opinion piece in the Shreveport Times.

Seventeen cattle die at a drilling site, and it’s nobody’s job to determine officially what killed them. No kidding.

State Department of Agriculture only gets involved with diseased cows.

Department of Environmental Quality? Those folks only fret with stuff spilled on the ground or into a stream.

The Office of Conservation mainly oversees where wells get drilled and how.

The property owner is paying for an analysis of animal tissue, but that’s his to keep all to himself.

How reassured does all this make you feel if you live near a well site?

There is an open criminal investigation of the April 28 incident, says Prator, and “we cannot get the answers we need — everybody points fingers at everybody else.” The agriculture department even reversed field. Press secretary Sam Irwin told The Times in a May 1 report that a state veterinarian had performed a necropsy on one of the cows, but in a June 13 follow up said, “We don’t have them … It was a DEQ investigation.”

The incident is the latest in the Haynesville Shale play to reveal gaps in regulation. Along with depletion of aquifers, it’s one more loop that needs to be tightened as local governments try to protect people, roads and the environment from exploration activity.

The state, obviously, isn’t helping very much. And while we agree with industry representatives and others that exploration companies want to do the right thing, cattle still died. Well sites blow out. Meanwhile, our state lawmakers mostly sat by with little legislation to offer up this session to better protect the public and delineate enforcement lines.

Prator last week planned to talk to the Caddo district attorney about his legal options in ferreting out necropsy results and other analyses related to his criminal case. DEQ only has said that tests of water and soil contained elevated chlorides, a salt, as well as oil and grease.

More important for the long term is pushing the Caddo Parish Commission, hopefully with other parishes paying attention, to ensure sheriff’s deputies get prompt notice of accidents at well sites. Control of the scene can help ensure law enforcement stays in the loop. Prator complained at the time of the cattle deaths that his deputies needed to be on a first responder list. That’s largely for public safety since parish deputies are often closest to rural accident sites, but partly to ensure a potential crime scene is protected.

If local officials needed a push to renewed oversight efforts of natural gas exploration, this bit of tragicomedy ought to be impetus enough. It’s not about overregulating a valued industry, but as Prator puts it, “logical regulation.”

Most likely, we will never find out what killed those cattle. A few million in cash handed to the owner as hush money like has happened so often and this story just becomes another one of those “incidents” that can’t prove anything so the hydraulic fracturing fluid is hailed again as perfectly safe. 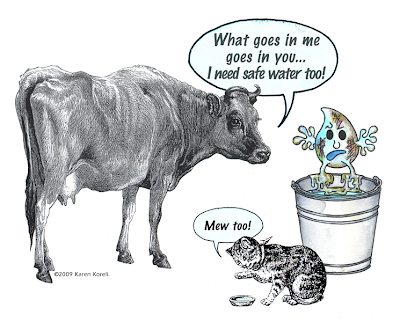