Chesapeake is flaring a Barnett Shale gas well near Rivercrest. 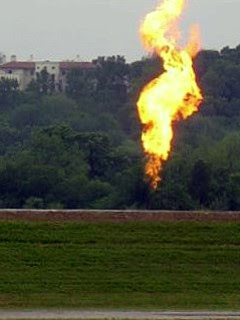 Flaring
Flaring is the practice of burning gas that is deemed uneconomical to collect and sell. Flaring is also used to burn gases that would otherwise present a safety problem. It is common to flare natural gas that contains hydrogen sulfide (i.e., sour gas), in order to convert the highly toxic hydrogen sulfide gas into less toxic compounds.