Another dispatch from Calvin Tillman, Mayor of DISH, TX

For the past several years, there has been an almost constant odor of natural gas surrounding the Town of DISH, TX. This led most of us to wonder about the dangers of inhaling this on a constant basis. We have complained multiple times to everyone that would listen to us, including the Railroad Commission of Texas, the Texas Commission of Environmental Quality, Environmental Protection Agency, as well as to the operators themselves. However, we have not gotten a great deal of relief for the odor. The companies, will do some work and the smell will subside for a while, but in a few months it will come back and gradually get worse, and worse, until it over powers us and we scream, and the process repeats. When we complain they commit to several things, such as notifying us when they have a known release, but after a short time that stops, and we just have the smell.

One of the main reasons that I have tolerated this is that we have been assured by the industry that what we smelled was only the odorant, and therefore we had nothing to worry about…no health risks. The story is that the natural gas goes straight up into the atmosphere, and therefore, we had nothing to worry about, other than the constant nuisance. We are also fortunate enough to have a metering station that adds the odorant to the gas here; therefore, at least a few of the 10 or 11 high pressure gas lines that come in and out of DISH are un-odorized. This facility has had several instances of spilled or overflowed odorant which is horrible to breath and smell. This constant odor has led many here to become complacent with the odor, and frankly some have assumed that is was only odorant, so if there was a real gas leak in their home, they would just assume that is was the facilities they have here. This has always concerned me that this level of complacency was dangerous; however, neither the industry nor the regulatory body appears to feel the same.

Although, the story that is told by the industry as well as the regulatory body sounds very convincing, I think back to a statement made by Ronald Reagan when talking about the Soviets, he said we need to “trust but verify” their actions. Therefore, I have made an investment in a combustible gas detector, and believe it or not the very first time I used it, I got a positive reading. I wonder if that means that we have really been smelling gas for the past several years? If you read the Material Safety Data Sheet for natural gas it has some health affects that are pretty disturbing, and we are likely being exposed to it. Also, this concerns me because I have small children that are also being exposed to this product, and whatever effect it has on an adult, I will be much greater on small children.

On the advice of someone, I called the Denton County Health Department to report this apparent constant leaching of natural gas. Unfortunately, they were unable to help me with this, because all of the authority in this case has been given to the Railroad Commission. I have called the Railroad Commission on literally hundreds of occasions to get them out here to do something, and to my knowledge they have never seen this facility, nor do they even know the location of DISH, TX. Therefore, I tried the next logical step, which is the Texas Commission on Environmental Quality, to help. The Texas Commission on Environmental Quality has actually been out here to look around, but they were apparently told to mind their own business, because nothing has happened, and they are not returning phone calls. One last shot…the Denton County Fire Marshall, surely he could help. He too was very sincere, and acted as though he wanted to help. He was to come out and assess the situation; however, I have still been unable to get anything accomplished, so it looks as though we are waiting for a catastrophe before we do anything.

Another major concern is that the meter that I purchased is a “combustible gas detector”; therefore, one could logically come to the conclusion that whatever it is detecting might ignite. So, we have 10 large high pressure gas lines intersecting here, which each claim to carry a billion cubic feet of day, which comes to 10 billion cubic feet of gas going through here every day. If there were ever to be an ignition source, this would be Lake DISH, instead of the Town of DISH. Now I am trying to be light hearted about this, but that terrifies us here, because we know that if that happens we are all dead. There would be very little chance that anyone would survive such a blast for miles around the facility.

In many high risk industries there are processes and procedures that are put into place to prevent a catastrophe called system safety. One example is the medical field, where two doctors must confirm which side a surgery will be on by actually signing the body part in question. This happened after several instances of performing surgery on the wrong body part, or on the wrong side of the body. However, there have been thousands of pipeline explosions, and they still allow a scenario that exists in DISH to happen. To make matters worse, one of the sights actually have a barbeque grill on the sight, surrounded by no open flames and no smoking signs. I have not seen them actually cooking something or I would have run for my life, but right in the middle of ten billion cubic feet of natural gas is a barbeque grill. I cringe when I turn my own grill on a half a mile away. We are being put in harms way by these companies, and there is nothing or no one that is going to do anything about it. 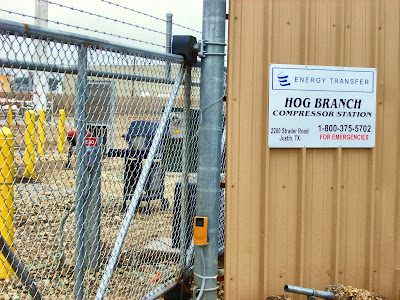 As previously mentioned the Railroad Commission has been notified on multiple occasions and has not yet done anything that is apparent to prevent this catastrophic event from happening. I have added some links to stories [Calvin’s links are at the end, my links are throughout] that highlight the inadequacies of this organization. As most of you know the Railroad Commission, is comprised of three commissioners that are elected. These elected officials take hundreds of thousands of dollars in campaign contributions from the industry that they regulate. Therefore, the deck is stacked against communities like DISH to live a safe and prosperous life. There have also been confirmed instances of the Railroad Commission turning their back on known safety issues, which led to the deaths of the people they are sworn to protect. There was a special on the national PBS show Bill Moyers that is the clearest illustration of this failure. Also the local television report for WFAA, Brett Shipp has done some remarkable stories on the Railroad Commission. The Railroad Commission was not founded to provide safety oversight of this industry, nor is it equipped to do so.

When the Railroad Commission is called for an emergency such as a strong natural gas odor, or a relief valve going off in the middle of the night, you first get an answering service which takes your information. It will be some time later, if at all, and then you might actually talk to someone from the Railroad Commission. This conversation usually does not amount to much, they ask questions, like is anybody dead? Does the media know? However, they ask for you to do all of their work for them. The ask you to give them the names and numbers of who they can call at the companies, and they will never actually offer to come here.

For the most part the individual you will speak to, will be located in Houston, Corpus Christi or Austin. Therefore, even if they wanted to see the facility, it would not be possible. On one occasion, I called the Railroad Commission after I had already called the operator to report a relief valve blowing of, and the employee actually asked, “what more do you expect me to do?” On another occasion I was told that the company could allow a relief valve to blow volatile natural gas for 24 hours before they were required to shut it off. Not much system safety going on here, nor is there any verifying, just trusting. Also, it might be interesting to take the industry views on risk management. I suspect you would get a lot of information on financial risk management, not so much on safety risk management. If they have any idea what that is, they are not showing it in their action in DISH

The industry of course would like to see the Railroad Commission be the only entity that it answers to. However, as previously mentioned, the Railroad Commission has not proven that it can handle to tasks it already has. If the State of Texas gives more responsibility to this organization, it will be a monumental mistake, which will affect this area for generations to come. It is clear that this organization is the “lapdog” of the industry, not the regulator. It certainly appears that when these safety risks are brought up, everyone sticks their heads in the sand and waits for it to go away. I have notified the companies and the Railroad Commission of the positive detection of natural gas, and I am not aware of any actions that are being accomplished to prevent the imminent catastrophe. The companies themselves are having barbeques, just tempting the theory of natural gas exploding, and the regulatory body does not even know where DISH, TX is. Isn’t this a nice situation to be in?

So in closing, DISH TX sets in the middle of 10 billion cubic feet of natural gas, and at any given time their is combustible gas that lingering around the entire area, we are dependent upon an organization that gets more money from the industry it regulates than the taxpayers who they are supposed to protect, and all other organizations are preempted from safety concerns for this facility. Therefore, the fate of the citizens here really comes down to a bean-counter at a corporate office. If they determine it is more cost effective to blow up the town, and opposed to being safer, then that is what they will do. They have made the financial decision with someone’s life in the balance before, and people are dead because of it, but they are still in business, why would they stop this action now. One thing that could happen, but not likely, is that someone who actually cared about the safety of the taxpayers could get elected to the Railroad Commission, and maybe then some things would change. You know come to think of it, I would make a good Railroad Commissioner, what do you think? Below are some links to articles and news reports about pipeline explosions and the Railroad Commission. Again I thank all of you who support us here in DISH, and feel free to pass this on. For those who get this via email please see the attached photo of the barbeque grill, and if you post it please show the photo.