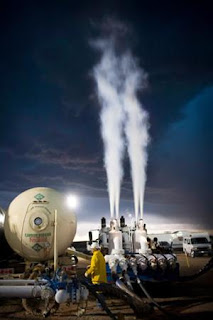 And according to Dr. Armendariz in an email to Don Young:

After drilling the main well bore, engines, water, sand, chemicals, and pumps are brought to the site to frac the well. Towards the end of the frac process and for a small number of days afterwards, the gas companies will let the well go through a “completion” process. During this time, the well is often let to vent to the atmosphere. During the venting, large amounts of natural gas, water, sand, oils, etc., will rise to the surface.

If you are seeing a “smoke” or some other cloud during the venting process, its possible that in the visible cloud droplets and in the invisible gases around the droplets are mixtures of any of the following: water droplets, water vapor, hydrocarbon liquids, hydrocarbon gases, chemicals used during the fracturing process, small bits of sand, and ? 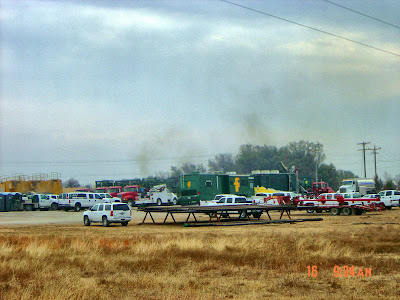