New Mexico had about 800 cases of water pollution and 421 of those were caused by sludge pits. To protect the natural resource that we cannot live without, water, New Mexico passed stricter legislation. 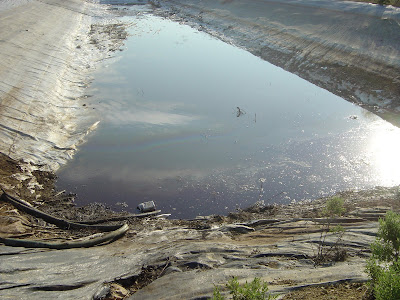 The article in the Albuquerque Journal requires a subscription but I received it via email.

The same industry that earned 400 Billion in profit last year and is slated to receive more than $32.9 billion in handouts from taxpayers over the next five years says they cannot afford to take these measures to protect New Mexican’s water so they will just pick up their rigs and move to Texas where our legislators care nothing at all about protecting water.

WHAT’S WRONG WITH THIS PICTURE TEXAS?
The threat is an empty one made many times before as New Mexico and Colorado pass tougher legislation to protect their environment. Statistics prove that the rig count has increased despite the bravado from industry.

An industry that only cares about money, continually points to the money drilling brings to communities. Money is meaningless when you are thirsty but you have no clean water to drink.