I just want you to know that, when we talk about war, we’re really talking about peace.
George W. Bush

January 30, 2009 — The executive director of the Barnett Shale Energy Education Council explains how natural gas can ultimately improve air quality — if it is used more to fuel vehicles and generate electricity instead of dirtier fuels like diesel and coal.

Ireland conveniently forgets that natural gas is not much use unless they first get it out of the shale where it has been trapped for millions of years. It’s the production of natural gas that causes horrific damage to our environment including air quality according to a peer reviewed study.

The economic benefits of natural gas production in the Barnett Shale are now obvious to North Texans – tens of thousands of new jobs, along with signing bonuses and monthly royalty checks to thousands of property owners who’ve leased their mineral rights

I have firsthand knowledge about royalty owners getting cheated out of royalties by producers and the cheating is becoming more and more common. Royalty owners are forced to either hire someone to conduct an audit of their royalties or take the word of an industry known for lying and cheating.

Many property owners are learning the hard way that royalty checks aren’t enough to cover the risks, the quality of life loss, and the destruction of property associated with living next to gas wells, not to mention the risk of depleting and polluting our water.

Ireland continues his propaganda by referencing the recent lawsuit filed against the EPA for allowing oil and gas to violate the Clean Air Act and issuing a lament about the possible consequences of this lawsuit.

Whatever the outcome of this and future lawsuits, stricter regulations will result in increasing the cost of natural gas production, which ultimately will reduce production, especially in “unconventional” plays such as the Barnett Shale where production costs are higher. Unfortunately, this result is at cross-purposes with the goal of reducing carbon emissions and improving air quality, because natural gas is the cleanest burning hydrocarbon.

Then he give us some “factoids” that are missing some important facts.

From Myth Busting: Methane, Worst of the Greenhouse Gasses, Caused by “The Cleaner Fuel.”

Methane, the major element of natural gas, is more harmful to the environment than CO2. The Environmental Protection Agency has assigned methane gas a Global Warming Potential (GWP) of 72 (20 year average). That means it is ”72 times more effective at preventing infrared radiation from escaping the planet.”

Natural gas production and use comes right after landfills as the chief source of methane gas.

The oil and gas industry is now trying to sell natural gas as a “bridge fuel” to help carry us until we can get clean, renewable energy sources going. This wouldn’t be nearly as offensive if producers would take the measures readily available and affordable to protect our environment. But they won’t unless they are forced with strict legislation and then they will only comply if they are constantly watched.

The next part of Ireland’s propaganda comes straight from Orwell:

There are many other avenues for using natural gas to improve air quality fairly quickly that are finally getting more attention, such as switching fleet cars and trucks to natural gas. Natural gas is very well suited for use by city buses, garbage trucks, and delivery trucks. Such vehicles run fixed routes and return every evening to storage areas where natural gas fueling stations can be installed.
Natural gas vehicles (NGVs) are proven and reliable. Over eight million NGVs are in use worldwide and the number is rapidly increasing. About 110,000 NGVs operate on U.S. roads, including 11,000 transit buses, 2,000 refuse trucks, 3,000 school buses and 12-14,000 vehicles in shuttle and a wide variety of truck applications.

Natural gas improves air quality.
Like this…
and this…
I just want you to know that, when we talk about war, we’re really talking about peace.
George W. Bush 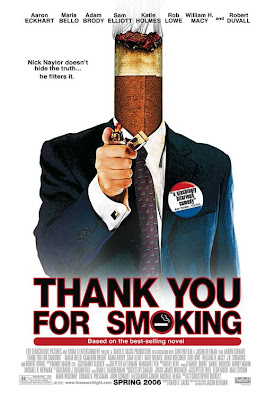 THANK YOU FOR SMOKING