Environmental groups are suing the EPA for

…failing to write emission rules for the oil and gas industry

According to a recent Southern Methodist University peer reviewed study,

…by 2009, residents can expect 620 tons of smog-forming compounds each day from producers working in the Barnett Shale, including 33 tons per day of toxic compounds such as benzene and formaldehyde, and 33,000 equivalent tons of greenhouse gases

The following is a video of a Denton County Barnett Shale gas well undergoing hydraulic fracture.

Below is a photo taken during the day at the same location. 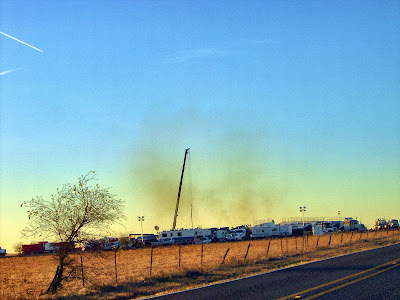 Sludge pits are another major source of VOCs. Texas needs legislation to require closed loop systems instead of sludge pits.